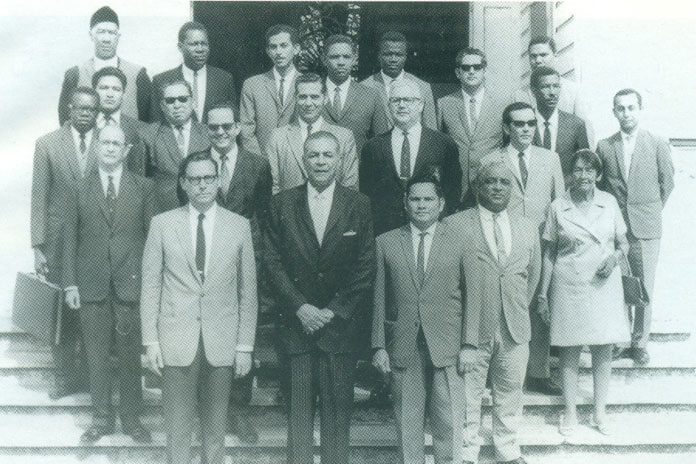 – from A HISTORY OF POLITICAL PARTIES IN BELIZE, by Lawrence Vernon, published on page 247 of READINGS IN BELIZEAN HISTORY (Second Edition), published by BELIZEAN STUDIES (St. John’s College), May 1987, edited by Lita Hunter Krohn 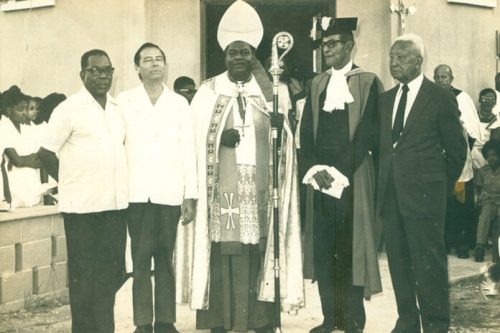 A classic late 1970s shot from the Amandala archives. W. H. Courtenay, Chancellor of the Anglican Church, is second from right

In last Friday’s column, out of the blue, so to speak, I started writing about Creole leadership during my lifetime, and for whatever the reason(s), I focused on a man unknown to Belize’s post-independence generations – Hon. Albert Cattouse, Sr.

Strictly speaking, if you are going to talk about Creole leadership in the twentieth century, you probably have to begin with Sir Woldrich Harrison “W. H.” Courtenay, who established his prestigious, still-going-strong, law firm in 1937. Can you imagine that, two years before Hitler invaded Poland?

What this means to me is that he sailed (steam ship) from British Honduras to England to study law in the early/middle 1930s, because there was no University of the West Indies until 1948 or so. For sure, W. H. must have had some very interesting experiences in London during his time in law school, a period between the two World Wars when Adolf Hitler and the Nazis were rising to power in Germany and preparing to challenge the United Kingdom for world supremacy (again), preparing to take revenge for Germany’s defeat in World War I (1914-18).

Personally, I don’t recall ever meeting W. H. Courtenay, but I worked in his law firm during the summer of 1967, when I was on summer holiday from college in New Hampshire. In charge of the law firm at the time was W. H.’s older son, Vernon Harrison “V. H.” Courtenay, but I seldom saw V. H. and he didn’t give me much to do. He was only doing a favor for my dad, the Postmaster General, who wanted a summer job for his eldest son – yours truly.

Of course I appreciated the summer job, especially since I had broken my right tibia just weeks before flying home and was in a cast from my hip to my toes. I remember a talkative handyman at the law firm whom they called “Sundance.” I’m sure he must have migrated to the States, like everybody else, because I never saw him again after 1967. And I remember that Harry Courtenay was the attorney for Emory King’s insurance company, and the two men worked closely together on accident claims. And, I remember running into the documents for the Ariel and Ajax oil companies in a desk, and in my youthful, spontaneous mind, I indicted Harry Courtenay as a legal facilitator for the predatory petroleum companies preparing to exploit my beloved country. I was not being fair to Mr. Harry, certainly not grateful, and to make it worse, from that point I began to view him as a personal enemy of mine. I was immature. But, more on that some other time.

In the summer of 1967, W. H.’s younger son, Derek, was wrapping up his law studies in England. W. H., “Old Man” Courtenay had been Belize’s most prestigious native attorney for decades when he took on the sedition defence of People’s United Party (PUP) Leader, Hon. George Price, in 1958. A British Honduras Supreme Court jury’s acquittal of Mr. Price added to Old Man Courtenay’s legend.

In 1961, W. H. Courtenay, a tall, majestic figure, became Belize’s first Speaker of the House under a new Ministerial constitution when the Price-led PUP won 18 out of 18 seats in the March 1961 general election.

But, in 1951, just a decade earlier, W. H. Courtenay had been the Leader of the National Party (NP), the pro-British political party which was the opposition to the wildly popular, anti-colonial PUP. W. H. was hated by the PUP, so much so that his home was attacked one night by PUP loyalists. I have heard about an arson attempt, but I was a child then, so I have no real street stats. (Incidentally, the present Prime Minister’s grandfather, the late Ebenezer Oliver Buntin Barrow, a high ranking civil servant usually referred to as “E. O. B.,” was one of the officers of the National Party.)

Now, something you have to note closely, if you are a serious scholar, is the fact that the British are unique in the Christian democratic Western European situation, in that the head of state, who is the king or queen of England, is also the head of the national church – the Anglican Church, known in the United States as the Episcopalian Church. So that, when W. H. Courtenay served as Chancellor of the Anglican Church in British Honduras/Belize, which he did for decades, he was working for and on behalf of Buckingham Palace – since 1953, Queen Elizabeth II.

The 1958 Supreme Court defence of Mr. Price, the nationalist, anti-colonial leader, by the de facto leader of the Anglican Church in British Honduras, is of massive significance historically. By 1958, it was the one Herbert Fuller who was leading the National Party, so when was it that W. H. Courtenay had begun to move away from the NP, on whose advice or instructions? When was it that the British decided to cut some kind of a deal with Mr. Price? Personally, I see the 1960 MCC Grounds as a peace offering by the British, who had thrown Mr. Price out of London “in disgrace” in 1957.

At some point, the Courtenay family, which had led the anti-PUP initiatives of the early 1950s, became PUP, in time for W. H. Courtenay to become Speaker in 1961 and for Harry Courtenay to take over the Collet constituency from Hon. Albert Cattouse, Sr., in 1969.

Incredibly, the man who became PUP Deputy Premier after Albert Cattouse, Sr. retired from electoral politics, had himself been in opposition to the Price PUP. C. L. B. “Lindy” Rogers was treasurer of the National Independence Party (NIP) in 1959 (and an elected Belize City Councillor) when he decided to move over to the PUP, and was welcomed by Mr. Price. The alliance between Price and Rogers became an intimidatingly formidable one in the 1960s and 1970s. From the late 1960s until the late 1970s, Lindy Rogers was a fearsome PUP powerhouse. (He first won the Mesopotamia seat in 1961, defended it in 1965, 1969, and 1974, but lost it in 1979, and that in itself was a very big story.) For the record, it has to be noted that Herbert Fuller led the National Party into an alliance with Philip Goldson’s Honduran Independence Party (HIP) in 1958, which is how the NIP, the substantive precursor of today’s ruling United Democratic Party (UDP), came to be.

For whatever the reason(s), Lindy Rogers did not like the Courtenays. But, with the Courtenays controlling the Anglican Church and the Buckingham Palace connection, who was really more powerful? This is a question which intrigues me. Even more intriguing is the fact that after Rogers’ election defeat in 1979 (when he sacrificed some of his Mesopotamia voters to assist Harry Courtenay in Collet against Ken Tillett), and after his demotion from Cabinet in 1983, when Harry Courtenay was logically the person to succeed Rogers as ruling PUP Creole honcho, Harry fell ill on a trip to Asia in early 1984 and did not defend his Collet seat in the 1984 general election.

After 1984, there was an extended Creole leadership vacuum in the PUP. At least, this is how it has appeared to me.

You will note that I still haven’t touched the Hon. Philip Goldson in my discourse on Creole leadership in Belize during my lifetime. There are three reasons I have given priority to looking at PUP Creole leadership first. One is that Mr. Goldson spent most of the latter part of the 1950s and the early 1960s concentrating on journalism. Secondly, Mr. Goldson, above all else, was a family man. That is my personal opinion. And lastly, Mr. Goldson never wielded the legislative/real time power which Albert Cattouse, Sr., Lindy Rogers, and the Courtenays did.

Until another time, I’ll see you when I see you.

Feature photo: The House of Representatives in 1965. Speaker Courtenay is between Mr. Price (left) and Orange Walk’s Guadalupe Pech in the front row. Lindy Rogers is on Mr. Pech’s left