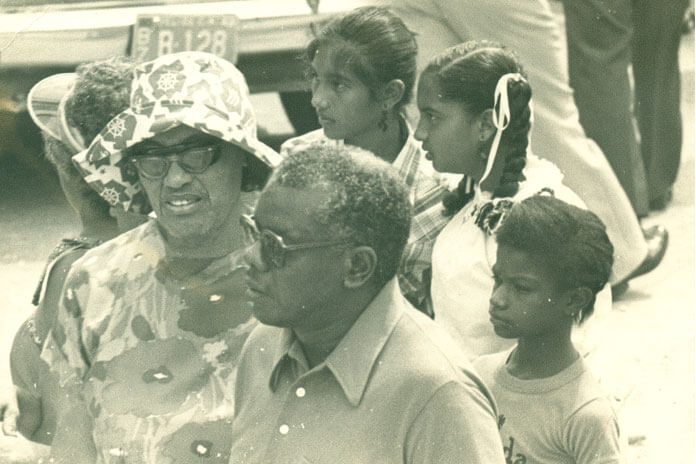 BELIZE CITY, Mon. Dec. 4, 2017– “Information gleaned from a document ‘Released under the John F. Kennedy Assassination Records Collections Act of 1993,’ suggest that the challenge to Hon. Philip Goldson’s leadership of the National Independence Party (NIP), by the attorney Dean Lindo in 1969, might have been orchestrated by Washington and Whitehall because of FBI intelligence which showed that Goldson had gotten too close to Fidel Castro and communist Cuba.”

“The revelation was astounding for political historians, because Mr. Goldson was surrounded in the late 1960s by people who were pro-British, pro-American, Christian, and definitely anti-communist. It is true that Mr. Goldson was so intense where the Guatemalan claim to Belize was concerned, that he might have thrown caution to the winds, so to speak. But it would be safe to say that most of Mr. Goldson’s supporters would have been alarmed by a Cuban connection.”

“The representative of Cayo North stated categorically: ‘Santiago Perdomo is known to have close contacts with the Guatemalan military.’ ‘The ACS is financed by well-laundered money from across the border.’ ‘The purpose of the ACS is to prevent the independence of Belize.’”

– excerpted from the headline story, “THE ESA (GUATEMALAN DEATH SQUAD) IS THE SPIRITUAL AND FINANCIAL FATHER OF THE ANTI-COMMUNIST SOCIETY”: SHOMAN, in AMANDALA No. 591, of Friday, December 5, 1980

There was a group of young, educated, black Belizeans who at some point decided to target the Deputy Premier, Hon. C. L. B. Rogers of the ruling People’s United Party (PUP), in his Mesopotamia constituency. (As we have pointed out in previous columns focusing on Creole leadership in the second half of the twentieth century, Rogers may have been the most powerful Creole leader in Belize from the middle 1960s through the 1970s.) When precisely this organized decision to focus on defeating Rogers took place, I’m not sure, but I know that Wilfred Elrington, Diane Haylock, and a former UBAD Party vice-president were prominent in a group which supported the Opposition United Democratic Party (UDP) candidate, Curl Thompson, contributing significantly to Thompson’s defeat of Rogers in the 1979 general election. (Rogers had defeated Thompson in Mesop in the 1974 general election.)

Curl Thompson, a large, black man, was the son of one of the natives of Barbados who had been recruited for the British Honduras Police Force in colonial days. Curl Thompson was a civil servant who became President of the Public Service Union (PSU) sometime in the late 1960s or early 1970s, if I remember correctly. He came to public notice as the only black man in a group of five which formed the Liberal Party in 1972. These five were: Nestor “Net” Vasquez, Sr., Manuel Esquivel, Paul Rodriguez, Harry Lawrence, and Thompson. Lawrence was/is a Creole, but a brown one: Thompson was black.

This was a time of color consciousness in Belize, so that Curl Thompson provided an important, valuable component in the leadership of the Liberal Party, which was a front for the prominent merchants in Belize, such as Santiago Castillo, Sr., and Ismael Gomez. (It is interesting to note that when the UDP came to power in 1984, Esquivel and Thompson, both Liberal Party originals, became Prime Minister and Deputy Prime Minister, respectively.) 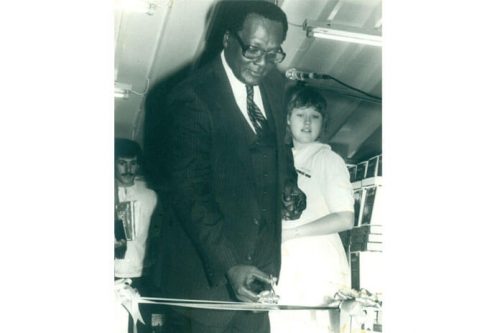 The Liberal Party was the first organized attempt to counter the socialist ideas which had been introduced into Belize by the young, London-trained attorneys – Assad Shoman and Said Musa, in 1969. In 1980, an actual Anti-Communist Society (ACS) was organized by the merchants to focus on the Shoman/Musa ideas, which were considered communist by the merchants but which had been accepted by Premier and PUP Leader, Hon. George Price, as in line with the papal encyclical of the late nineteenth century – De Rerum Novarum. (A prominent leader of the ACS was a former PUP Cabinet Minister and Cayo South area representative from 1961 to 1979 – San Perdomo.)

It is simply amazing to me that there has been such an absence of intellectual discourse in Belize, especially so since political independence, about the history and role of the trade union movement here insofar as the party politics of the second half of the twentieth century has been concerned. The General Workers Union (GWU) had been formed by Clifford Betson, with the assistance of Henry Middleton, in the middle 1940s, and the GWU became the muscle foundation on which the anti-colonial PUP had been established in 1950. In all elections from 1951 to 1957, the GWU and the PUP were in open alliance, and during this period, PUP leaders such as Leigh Richardson, Philip Goldson, Nick Pollard, Sr., and George Price were all officials of the GWU.

It appears to me that it was important to the PUP leadership for the process by which the GWU was essentially replaced by the Christian Workers Union (CWU) after 1957 to be as invisible as possible. 1957 and 1958 were turbulent times in Belize politically, because the British colonial authorities had gone on the offensive by expelling Mr. Price from London talks in 1957 and then charging him with sedition in 1958 in the British Honduras Supreme Court. Remember now, in the latter part of 1956, Mr. Price had overthrown Leigh Richardson and Philip Goldson from leadership of the PUP. The Opposition National Independence Party (NIP), with which Mr. Goldson had become allied, was at the peak of its strength, winning four of the nine Belize City Council seats in the 1958 CitCo election. Mr. Goldson’s newspaper, The Belize Billboard, was far and away the leading newspaper, and the Guatemalan question was hotter than ever, because the new Guatemalan president, Ydigoras Fuentes, was very militant where the Guatemalan claim to Belize was concerned. The change of leadership in the PUP in 1956 and the Guatemalan claim during the Fuentes era contributed to a heightened race consciousness in British Honduras, the population of which was majority black at the time.

The matter of workers’ rights was complicated in the colony by the fact that the Public Service Union, whose membership was made up exclusively of the clerical, civil servant class, was always much opposed to the PUP, from the PUP’s birth in 1950.

Here is where the party politics in British Honduras/Belize has been, to my mind, confusing and unclear. The polemics have always focused on the personalities of the major party leaders, religion to an extent, and the flags and slogans and music and street rhetoric, but the issue of economic development philosophy — the role of the state specifically, whether Belize was to remain capitalist or become socialist, has always been a sub-surface discussion.

The Minister of Labor during the 1960s, Lindy Rogers, controlled the trade union movement where the waterfront and other manual workers were concerned, through the CWU, but the PSU, led by Harold “Fats” Young in the early and middle 1960s, remained very much anti-PUP, and therefore, by extension, pro-British and pro-capitalist.

The only person to respond to the FBI documents published by Amandala on Tuesday, December 5, of 2017, which charged that Philip Goldson, the Leader of the Opposition NIP, was linked with communist Cuba in 1967, at which time Mr. Goldson was fighting the Webster Proposals for Belize’s subjugation to Guatemala, was the late Compton Fairweather. No UDP leader at any level has ever said a word about the FBI documents. The importance of these FBI documents is that they explain, to my mind, why there was a serious attempt to replace Mr. Philip as NIP Leader in 1969, and the documents explain, to my mind, why the Liberal Party was formed, and why the tiny Liberal Party became of more consequence in the three-party coalition which formed the UDP in 1973 than the ranking NIP.

These documents also explain, I suggest, why Curl Thompson has arguably faded into oblivion where Belize’s political discourse is concerned, after being a founder of the Liberal Party and Deputy UDP Leader and Deputy Prime Minister between 1984 and 1989. It is possible to view Curl Thompson as being used as a foil to Mr. Goldson where political leadership of the Creole people was concerned. Mr. Goldson, however, remains the supreme Creole icon in the Belizean narrative.

Feature photo: NIP stalwarts, such as Kathleen Frazer (a staunch Methodist seen here with Mr. Goldson), would have been opposed to any links with Fidel Castro’s Cuba in 1967. Belizeans on a whole knew very little about the 1961 Bay of Pigs invasion, the 1962 Missile Crisis, and how hostile Fuentes’ Guatemala and Castro’s Cuba were to each other.