Home Highlights Amidst GAF control of the Sarstoon River, Belize still in search of...
Highlights

Amidst GAF control of the Sarstoon River, Belize still in search of Sarstoon protocol 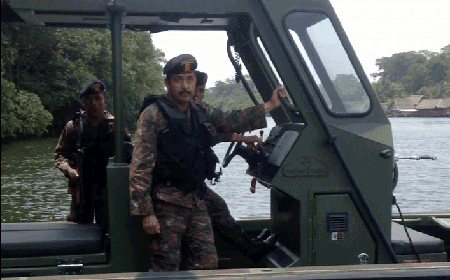 BELIZE CITY, Wed. Dec. 19, 2018– In May 2015, Belize entered a new reality at the Sarstoon River, where it shares its southern border with Guatemala. The Guatemalan Armed Forces (GAF) began exercising complete control over the entire Sarstoon River, and they have been insisting that Belizeans traveling on the river first get their permission before venturing onto it, at times telling Belizeans “to respect the protocol.” There is, however, no formal protocol between Guatemala and Belize when it comes to navigating the Sarstoon River, long regarded as the border between the two countries. Then on May 28, 2015, the GAF demanded that a group of Belize National Coast Guard officers move from an area on Sarstoon Island, where they had gone to scout out an area to build a forward operating base. Ever since then, Belize has been trying to get Guatemala to agree to a Sarstoon protocol that would normalize movement on the river which divides both countries.

Another opportunity arose at last week’s SICA Heads of Government Summit that was held in Belize; however, Belize came up empty-handed again because its diplomatic nudging fell on deaf Guatemalan ears.

Belize Foreign Minister, Hon. Wilfred Elrington, sounded almost apologetic when he was asked if the Sarstoon protocol was one of the issues discussed at the high-level meetings during the SICA summit.

“We have raised that issue with them and they’re still having difficulty with compliance and I am sure that the Prime Minister will raise it when he meets his colleagues as well. It is not that they have given up on the commitment. It is simply that they have not yet honored it to the extent that we want it honored. The suggestion is that they have internal difficulties which make it very difficult for them to be able to do that in this point in time. But there are other avenues that we mutually embarked upon to make sure that we will remain relatively safe, but it has not been the case that they have complied in the manner which we wanted, with the undertaking which they have given some time ago in Istanbul,” Elrington said.

Following the SICA summit on Friday, December 14, Prime Minister Dean Barrow also addressed the matter of a Sarstoon protocol, telling reporters, that “between now and April 10 [ICJ referendum day] Belize would still be pressing for us to try to come up with a modus vivendi for the Sarstoon that would guarantee that our rights would be respected, but I can’t tell you that I was able to achieve that today.”

We asked the PM if Belize shouldn’t have acted earlier on the matter of the Guatemalan incursion in the Sarstoon, which began in 2015.

Barrow replied that Belize had protested the Guatemalan incursion at all international forums and at the Organization of American States (OAS).

“But in terms of coming up with a written protocol, it takes two to tango. The Americans have encouraged them to come up with a written-down agreement with Belize, but the Guatemalans, for their own reasons, have been resisting this, and while we continue to press, there is no way that we could have put a pen in their hand and forced them to the negotiating table and say, sign this.” Barrow explained.

We also asked the PM if there is a mechanism for Belize to have gone to the United Nations Security Council, to see what they would have said on the matter.

Barrow said the matter is already being dealt with in the context of the OAS, which is the regional organization overseeing such matters, and if we had gone to the Security Council, he thinks we would have run the risk of it being said that it is already being dealt with by the OAS. Barrow added that he was “not sure what the powers of the UN Security Council are in regards” to the matter.

The Prime Minister explained that the advice that the government of Belize has gotten from their own experts is that if Belize votes yes in the ICJ referendum, and we agree to have the ICJ provide the solution of the matter, “we could ask the ICJ for an interim relief.”

We asked Barrow if the ICJ could recommend UN peacekeeping troops.

“I am not entirely sure about the remit of the court, so I don’t want to speak on things that I am not sure of,” Barrow said.