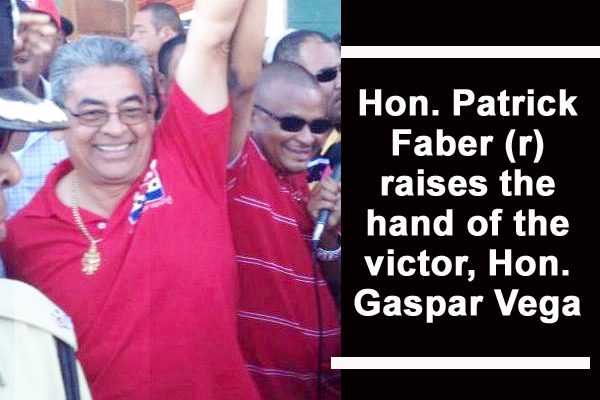 Patrick Faber said that had it not been for the Prime Minister’s “interference,” he would have won

Both Alberto August and Fern Gutierrez, who won their posts, ran on Gapi Vega’s slate

The United Democratic Party held its National Convention on Sunday, February 17, 2013, in Corozal. The UDP claims that a crowd of over 8,000 attended the event to witness and support the appointment and election of new party officials.

Elections for the positions of first deputy party leader, party chairman and vice chairman were held at the bi-annual convention. Votes were cast by 567 delegates, which encompass representatives of the 31 divisions, senators, central executive members, parliamentarians and other senior members of the party.

The highlight of the day was the elections for the first deputy party leader, contested by Deputy Prime Minister Gaspar Vega and Minister of Education Patrick Faber. The faceoff between Faber and Vega had received major media attention, as Faber aggressively promoted himself as the better man for the job.

Vega, who did not run a media campaign, received the public endorsement of Prime Minister Dean Barrow three weeks before the race. Barrow, in various media interviews, had said that “at this time” he preferred Vega as his first deputy, to preserve what he calls the “ethnic and geographical” balance inside the party and in the government.

Alberto August, who is a former Chief Elections Officer, blew out Senator Roosevelt Blades for the post of chairman of the party, 379 to 183; and Fern Gutierrez, the lone UDP councilor in the present Punta Gorda Town Board, trounced Belize City councilor Roger Espejo, 372 votes to 180, for the post of vice chairman. Both August and Gutierrez ran on Vega’s slate, while Blades and Espejo joined Faber on his slate.

While it was easy for Vega to be magnanimous in victory, saying that his opponent “made the United Democratic Party prove to the people that we believe in democracy,” Faber, for his part, was visibly crestfallen: despite pledging his continued support for the party’s leadership, he insisted that had it not been for the Prime Minister’s “interference,” he would have won.

One notable announcement at the convention was the UDP’s resolution to support both the referendum process and a “yes” vote on the question of whether to take the Belize-Guatemala dispute to the International Court of Justice. The convention delegates made it clear that they encourage all registered voters to vote on referendum day, October 6, 2013.

Several declarations were made at the convention, including messages on youth development, the government’s determination to strengthen the police department and improve the legal system in areas related to the prosecution of violent criminals and sex crime offenders, and the amendment of internal statutes to reflect gender equality.

Also announced on Sunday was the amendment of the UDP Constitution to now reduce the minimum age for membership in the party from 15 years to 13.

UDP delegates Carmita Contreras, Grace Fairweather, Israel Alpuche, and Frank Lizama were given special recognition for their dedicated support to the party.

In his keynote address, Prime Minister Barrow made it clear to the convention delegates that he fully intended to take the UDP into the next general elections.

“As long as the Good Lord continues to give me health and strength and as long as it is your wish,” says the two-time Prime Minister.