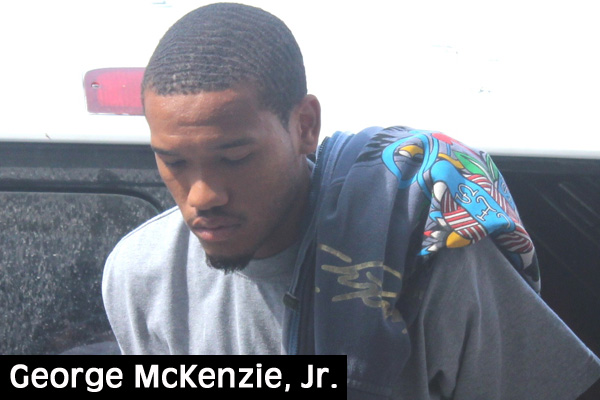 An unusual thing happened at the Belize City Magistrate’s Court on Thursday, when a man who has been accused of a murder was brought to be arraigned, but the charge was withdrawn based upon new evidence from police.

George McKenzie, Jr., 19, the son of slain gang leader George “Junie Balls” McKenzie, a resident of Pinks Alley, has been accused of the April 12 murder of Alfonzo Cruz, 57, who was gunned down as he stood in his yard in Rhaburn’s Alley.

Police brought McKenzie to court this morning around 9:15 and by 10:15 the matter was assigned to be heard in Senior Magistrate Sharon Frazer’s court #2.

But when Frazer inquired why the matter was being removed from her court, Inspector Carol Tucker from the Police Prosecution Branch appeared in court and explained to the Magistrate that a directive had come from the Director of Public Prosecution’s office that the matter was to be put on hold until further notice.

McKenzie was escorted back to the Crime Investigation Branch office, where he remained in custody pending the outcome of further police investigations.

On Saturday, April 12, Alfonso Cruz was shot multiple times as he stood in his yard in Rhaburn’s Alley. Cruz sustained gunshot wounds to the left side of his chest and to his lower back.

After he was shot, Cruz ran for cover in his house, but collapsed and died from his injuries.

The motive for the killing is yet to be determined by police investigators.

Reports are that Cruz is a well-known man in his neighborhood. He was employed as a heavy duty machinery operator.

Outside the courtroom, McKenzie’s relatives were upset, and insisted that the recent graduate of Maud Williams High School was innocent.

They say police have charged the wrong man for Cruz’s murder.

On August 28, 2007, “Junie Balls” was executed whilst standing in front of a Chinese restaurant at the North Front Street entrance to Pinks Alley, where he resided.

The suspected trigger man was Edward Lord. Lord was charged with the murder, but on March 5, 2009, Lord walked from the murder indictment after he was acquitted in the Supreme Court of Justice Adolph Lucas.

Facebook
Twitter
Pinterest
WhatsApp
Print
Previous articleBefore he was remanded, man tells Magistrate, “I got a job, I no into jail and thing”
Next articleFive die over Easter 2014