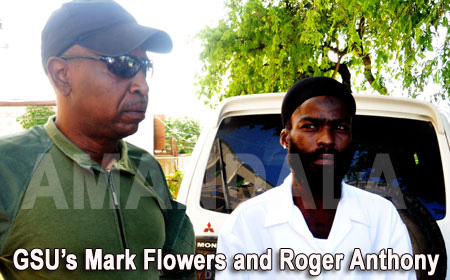 BELIZE CITY–Roger Anthony, who reputedly is the leader of the Ghost Town Crips gang on Mayflower Street, appeared beside the Commander of the police’s Gang Suppression Unit, Inspector Mark Flowers, on the compound of the Racoon Street Police Precinct, to make an unusual announcement.

Anthony, looking composed, standing beside Flowers, declared: “I am here today to say that the gang life that I’ve been in for the past 26 years, that isn’t a life. And I think it’s time for us, we as leaders, to make a change and to stand up and help the police, especially the Gang Suppression Unit, to stand strong and work with each other as leaders of the community so that we can make a change.”

Amandala asked Anthony what inspired him to make such a drastic life change.

Now that Anthony has said that he has renounced the leadership of the “Ghost Town Crips,” will he be spared from the microscope of the GSU, Amandala asked GSU Commander Flowers.

Flowers replied: “I have not said that we were going to stop working. I am saying that we are going to work with people on a different level and if somebody, anybody who does nothing, there is nothing to fear. They can go about living their life in a constructive, positive manner, then certainly, you are not going to be on the GSU radar.”

Anthony said, “It’s not like I am going to move out or anything; it’s just that we are going to do positive things.”

Anthony, in his move to reform his life, according to Flowers, has removed all of the gang-related tattoos that could land him in trouble with the law, and he said that he is not going to look back.

“You can’t look at the past; we have to look at the future. That’s what I am doing. I ain’t looking back at the past,” said the man who has been at the helm of the Ghost Town Crips for many years.

It remains to be seen if Roger Anthony’s decision to abandon the gangster life will resonate with other gang leaders in Belize City’s violent gangster world, where life or death is just a bullet away, even as the GSU retools its efforts to live up to its mission of dismantling the criminal gangs in the country.