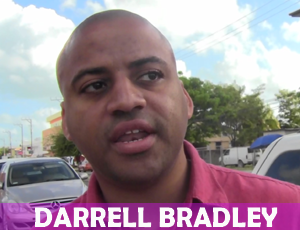 BELIZE CITY, Thurs. Sept. 8, 2016–In an exclusive interview on Wednesday night with 7 News, Mayor Darrell Bradley took a firm position against the move by Prime Minister Dean Barrow to supplant a Senate inquiry into irregularities at the Immigration and Nationality Department with the appointment of a bi-cameral committee to look into the issue.

In his interview, Bradley not only expressed his support for the march against corruption organized by the Opposition People’s United Party (PUP) on Wednesday morning, but he also made clear his support for a Senate inquiry into the findings of a special audit by Auditor General Dorothy Bradley into the issuance of Belizean passports, visas, and nationality by the Immigration Department.

The Senate “is constitutionally mandated to carry out such inquiries … I don’t see how a joint committee, where you have persons who are themselves named in the report itself, could give it the kind of credibility that an inquiry needs to have,” said Mayor Darrell Bradley

Bradley’s support for a Senate inquiry goes against the wishes of his Party Leader, PM Barrow, and the Leader of Government Business in the Senate, Minister Godwin Hulse, who, during the last Senate meeting, voted a motion tabled by the Opposition for a Senate inquiry into the explosive findings of the Auditor General on massive corruption in the Immigration and Nationality Department, and who, instead, said that the inquiry into the findings of the audit should be held by a joint select committee drawn from the Senate and the House of Representatives.

Bradley defended the proposed Senate inquiry by telling 7 News, “I think that the Senate has the constitutional mandate in relation to making inquiries of this nature. I think that the Senate would be a more well-positioned and objective body having representation from the social partners and a stronger voice from the Opposition. I don’t see how a joint committee, where you have persons who are themselves named in the report itself, could give it the kind of credibility that an inquiry needs to have, so that if I would give my voice to this, I would have to say that I support a Senate inquiry.”

He further went on to explain, “It is necessary to restore public confidence in the institution of government for a nation to move forward, and I think that the best way to do that is for there to be an inquiry by the body that is constitutionally mandated to carry out such inquiries, and by a body that was specially designed with social partners in its makeup to have a voice in relation to this, and I do believe that the Senate is the institution best poised to carry out that inquiry.”

“We need to ensure that the public is satisfied that an inquiry is carried out. It is through whatever questions need to be asked; must be asked; whoever has to be brought before that inquiry must be brought before that inquiry, must be made to give an account and whatever actions thereafter should be recommended and should be taken, because we need the public to be satisfied that this type of action is at an end,” he further said.

After defending the Senate inquiry, Bradley took another punch at his party.

He told Amandala, “I’ve heard of stories [about] Ministers, you can say, in relation to the amount of assets that they had. One of the things that the government put in their manifesto many terms ago was legislation to hold them accountable … those things will never go in law if the public does not demand that those things are enacted in law.

“I support protest on the issue of the elimination of corruption, but they have to be sustained and they have to be strategic in ways that actually get a result, so that we have government officials in place who can really be there for the right reason, because again, everything that we do as a society is brought to nothing if the person in that high office is somebody we cannot trust.”