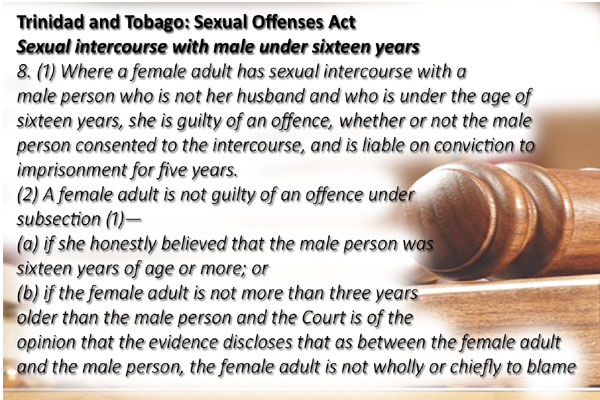 The Office of the Special Envoy for Women and Children held a press conference, in collaboration with the Ministry of Human Development, Social Transformation and Poverty Alleviation, at the Radisson Fort George Hotel in Belize City Wednesday morning, at which they presented Government’s defense for controversial changes to Belize sexual offense laws—changes which some concerned citizens have criticized as oddly introducing gender neutral clauses which, they contend, favor the legitimization and mainstreaming of homosexuality and other acts banned under Section 53 of Belize’s Criminal Code as “unnatural crimes.”

The press conference was held in the context of a breakfast meeting with the press. When we showed up, in an effort to catch the main part of the press briefing, Judith Alpuche, the Chief Executive Officer in the Ministry of Human Development, Social Transformation and Poverty Alleviation, was countering allegations that the legislative proposals are being implemented by the Government of Belize to accommodate UNIBAM – United Belize Advocacy Movement, an NGO which is challenging the constitutionality of Belize’s anti-sodomy law in the court.

She said that if there is a way to remove any doubt by clarifying anything in the draft bill, they will ask legal drafters to do that.

She maintained that the new laws are being proposed to protect children. Moreover, one central defense offered by the Government reps at today’s press conference is the need to protect male minors from sexual predators.

Alpuche said that they are not trying to pre-empt the court’s ruling on the UNIBAM case – a ruling which has been pending for months.

“Another thing that has been said is about the language – that the language is indelicate. Well, you know what, these issues are indelicate and we have to be very clear about what is happening and what is happening to our children includes penetration of the anus, of vagina with penis and that is the language that we need to have … and [penetration of] mouth, with objects also! We have seen it all in the child protection sector – the level of exploitation and violation of children, and we cannot shy away from this because we are trying to be delicate,” Alpuche said.

“I’m very sorry if this causes disquiet for some people. I think it should, because we need to acknowledge the reality of what is on the ground, and we need to really think about, as a community, if we are serious about protecting children or if we are about promoting other agendas,” she added.

Asked why the law does not include provisions that differentiate the levels of penalty based on the kind of penetration, Michelle Daley, Deputy Solicitor General (Legislative Drafting), said that due to the way the law is written, the judiciary will have the discretion to apply the appropriate sentences based on the circumstances of the act prosecuted in court.

“As far as I know of, and I stand corrected, but I do not know of any precedence where there has been any distinction between how you have been penetrated during a rape. Violation is violation. I don’t think that if I was raped vaginally, I am less traumatized than if I was raped anally or by all three. Trauma is trauma and I think the courts will, in assessing the evidence that is before it… then determine how it will sentence an individual that is convicted of a particular type – of rape, and will look at the circumstances holistically,” Daley said.

She confirmed that there are no proposed provisions which vary penalties based on whether the sexual contact is done vaginally or anally.

However, as the laws now stand, the maximum penalty for sodomy is 10 years – while the maximum for rape of a female is life. The law does have provisions to slap perpetrators with the charge of “aggravated assault of an indecent nature” – which attracts a sentence of a few years.

“I have personally listened to the cries of parents who say, ‘My 14-year-old is being ‘forced-ripe’ by some 30-year-old woman, and he wants to fall out of school and he’s bright. And what can I do – and there is absolutely nothing that can be done,” Alpuche commented.

Currently in Belize law, the only way such a person can be charged is if force is used, in which case the charge would be aggravated assault of an indecent nature.

We looked at the Sexual Offense Act of Trinidad and Tobago—whose buggery laws are also being legally challenged—to see how that country sets out provisions to address similar crimes. For one, Trinidad differentiates between sodomy (captioned buggery) and bestiality – the former of which attracts a possible life sentence if perpetrated against a minor by an adult and up to 25 years if perpetrated by an adult against another adult. However, if committed by a minor the sentence is capped at 5 years. Bestiality also carries a sentence of up to 25 years.

Meanwhile, the Trinidad law treats unlawful carnal knowledge with a minor male as a different category, as detailed in the box accompanying this article.

The Government reps highlighted the lack of proper protection in Belize law for under-aged boys against sexual predators. The proposed amendments to Belize’s Criminal Code do not create special provisions to deal with acts specifically against male minors; and in that regard it has been described as “gender neutral.”

“What we have done is to create the offense in the way that …we now can have a boy’s parent complaining – an under-aged boy’s parent complaining – if that boy is having sex with either an under-aged girl like himself, or an older person, because at present there is no protection for boys – under-aged boys – in relation to sex. We protect our girls, but we do not protect our boys. And there has been, based on the evidence that came out in the policy, that there is an increase in the abuse of under-aged boys by both men and women, and it is that that we are seeking to protect against by removing the restriction ‘female only’ in relation to carnal abuse and widening it to both boys and girls,” Daley said.

Kim Simplis-Barrow, Special Envoy for Women and Children and wife of Prime Minister Dean Barrow, said, “I think that for some people, they don’t live our reality. They don’t sit and hear the stories about these little boys when they tell us what is happening to them – how they are violated and so we should still keep our laws the way they are? Vague? Not say that if a child is violated – if a boy, especially is violated, is raped by another man … leave it vague so that the judge’s hands are still tied? No! We need to move away from it and we need to face reality. This is our reality and our perpetrators must be brought to justice.”

The Government reps undertook to listen to public concerns and recommendations on the bill.

“We will give the public as much time, reasonable time, to submit queries, to give suggestions, to clear this up, to ensure that we have a robust law to protect our children and to punish perpetrators; therefore, we are having the public consultation next week Tuesday; we’re inviting everyone, every interested party,” Barrow said.

She said that “if we have our children at heart” after the dialogue and refinement of the bill there should be 100% support.

Daley said that at this time, they are not touching Section 53 of Belize’s Criminal Code, which sets out penalties for unnatural crimes:

“If the courts decide one way or the other, and it requires that the law be amended, then I imagine that we would then await instructions, because it is not our remit to simply amend legislation but we are instructed to amend legislation. We would await instructions as to how to proceed,” she said, adding that until Government has a judgment before them, they would not know whether an amendment to Section 53 would be required or not.

Another major dimension of the bill is a new section that introduces provisions for the establishment of a sex offenders database. However, the press was advised that this database – at least initially – will not be for public access but only accessible by enforcement authorities and Government entities such as the Ministry of Education and the Teaching Services Commission.

Asked how the database would capture sex offenders who come from overseas and molest minors while hiding out in Belize, Daley said this is something that will be a matter of policy, and the ability of Belize to capture such data will, furthermore, depend on information sharing agreements Belize has with other jurisdictions.