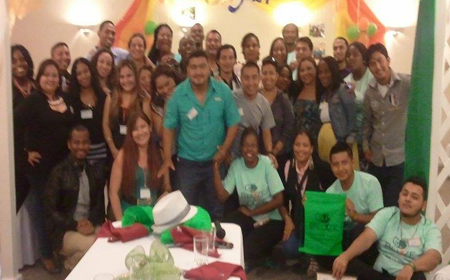 BELIZE CITY–GoBelize is a non-governmental organization which is focused on advocating for the rights and development of youths in both rural and urban areas. Today, the administrators and alumni celebrated the program’s 10th anniversary while incorporating the graduation ceremony for ten additional cohorts who joined the organization this year.

After starting out under a regional initiative known as “GoJoven” in 2004, the program evolved and later localized in Belize through the efforts of past graduates who came together to contribute to the leadership and development needs of Belizean youths.

Executive Director, Eva Burgos, who was one of the first to undergo the internationally funded, youth-led program, told Amandala about her role in the program and its future initiatives.

She said, “It has been a milestone for me because I was part of the first [group of] cohorts and that kind of gave me time to value the program and really see the change and the impact it has on young people and the benefits that it has to our country.”

“For next year, we do have projects [in conjunction] with UNDP [United Nations Development Program], whereby we will be reaching out-of-school young people who are not able to be captured by the school systems, so I am excited about that because I will be reaching out and also touring my own country, visiting the remote communities in Belize”, she added.

Burgos explained that so far, 66 alumni have passed through their gates, including the 10 who graduated today, and that the program is solely funded by the Summit Foundation, which is an international family-oriented organization that is focused on issues primarily related to sexual reproductive health and environmental consciousness in several Mesoamerican countries, including Belize.

We understand that recently, GoBelize — which is based in Belmopan — has collaborated with the Ministry of Health to improve Adolescent Sexual and Reproductive Health (ASRH) by providing information to young people through peer education aimed at reducing adolescent pregnancy, HIV & transmission of other STI, as well as by advocating for youth friendly services & comprehensive sexuality education training.

Since 2004, its parent organization, GoJoven has engaged in initiatives pertaining to youth leadership, development, and mobilization to create positive change in Adolescent Sexual and Reproductive Health programs, policies, and services in Belize, Honduras, Guatemala, and Quintana Roo, Mexico.