PM Barrow blasts the PSU for not being willing to forego salary increments – “We can’t pay money we don’t have.” 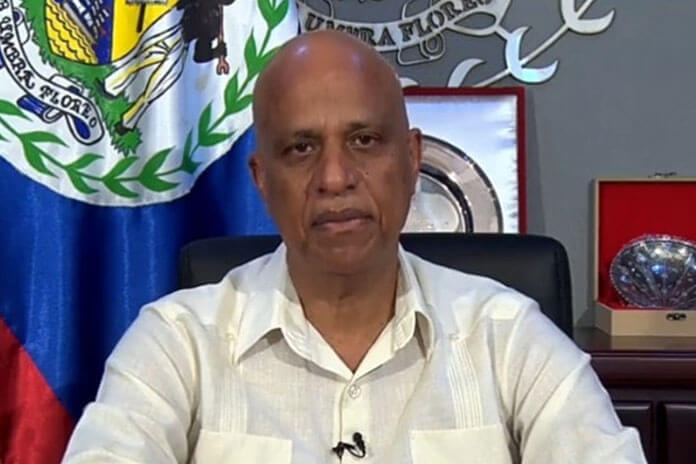 BELIZE CITY, Fri. May 8, 2020– Prime Minister Dean Barrow called a virtual press conference from his Belize City office this morning and laid bare the facts that the government is broke and that the country’s economy has been devastated by the COVID-19 pandemic, which is a health threat that the government is still trying to confront and avert.

Barrow also addressed the standoff between the government and the Public Service Union (PSU), which recently rejected government’s proposals to freeze increments for the next two fiscal years.

Barrow announced that if the trend of no new coronavirus cases holds out after the 28-day milestone is reached, the National Oversight Committee and Cabinet will move to ease some of the restrictions that are now in place under this extended State of Emergency.

Reading from a prepared statement, Barrow said, “The National Oversight Committee will meet as usual on Monday, followed by Cabinet on Tuesday. They will be asked now to provide for greater cross district movement, particularly so as to enable a domestic tourism push.”

Barrow explained that the domestic tourism push naturally raises the issue of foreign tourism, but in his personal estimation, “we are not there yet.”

Barrow added that at a virtual meeting of CARICOM heads it was agreed that foreign tourism will not restart before July, and in a reference to the opening of Belize’s borders, the PM stated, “I have never said that the opening of our borders will have to wait on a vaccine.”

Barrow said, however, that we would have to look at the trajectory of the virus in the United States.

Deaths in the U.S. from COVID-19 are expected to spike next month, and presently, an average of over 1,000 die each day from the virus.

PM Barrow is hoping that a rapid test, to test tourists upon their arrival at the country’s entry points, could be developed by July.

Barrow also announced that plans are being worked on for the repatriation of Belizeans who have been left stranded overseas. The plans would be made public after next week’s meetings, said the Prime Minister.

Barrow explained that government’s assistance to the persons who lost their jobs due to COVID-19 has benefitted some 40,000 persons.

When it comes to government’s food assistance, Barrow said, “23,913 households, or 91,052 individuals, have now been serviced.”

Barrow said that not one dollar has so far come from the international financial community.
“They do insist, though, that the funds will ultimately come. Indeed, the IDB says it expects to disburse by month’s end the 12 million BZ for the Ministry of Health. Meantime, of course, we have already spent 6.2 million dollars on procurement of supplies to fight COVID-19,” Barrow said.

After outlining government’s COVID-19 situation, the Prime Minister turned his attention to the impasse between government and the PSU.

The PSU was supposed to have answered government’s proposal regarding the freezing of their increments and other emolument matters today. Amandala has learned, however, that the union has rejected government’s proposal. This has apparently paved the way for the Prime Minister to change the Public Service Regulations to give him the power to make adjustments to public officers’ salaries.

In addition to the PSU, government has also made its pitch to the other two public sector workers unions, the Belize National Teachers Union (BNTU) and the Association of Public Service Senior Managers (APSM).

Barrow noted, however, “The other two unions have not made clear their particular positions, so I need to concentrate especially on the PSU.”

“There’s this stalemate between us over our proposals that public officers should forgo increments for this fiscal year 2020/2021,” Barrow pointed out, before saying, “Also, that senior public officers should agree to a reduction in certain of their allowances; and finally, that there is to be a withholding of a portion of gratuity and allowances for all contract officers including, of course, the chief executive officers.”

“Allow us to point out, however, that contract officers and chief executive officers do not fall under the Public Service Regulations and are not represented by either the PSU or the APSM,” he said.

Barrow went on to highlight the government’s fiscal shortfall due to the lockdown resulting from the pandemic.

“Remember, too, that these taxes are paid in arrears, so to speak. So, the April 2020 collections relate principally to March 2020 business activity. March was, of course, before the lockdown — the point being that this May month’s 2020 collections relating to April 2020 business activity, when the lockdown was in full effect, will see an even more precipitous fall. The projection, in fact, is that April’s fall to 21.8 million dollars will drop further to only 11.2 million dollars in May,” he said.

The Prime Minister, who holds the Minister of Finance portfolio, said that revenue from Customs duties and fees fell by some $20 million, and the same picture holds true when it comes to revenue from the General Sales Tax (GST).

Barrow went on to lament that private sector jobs have been decimated, and “in excess of 80.000 persons have applied for government’s assistance.”

Barrow then blasted the PSU for its unwillingness to make the sacrifice that the government is asking.

Prime Minister Barrow has cultivated the habit of resorting to legislative fixes when the government is in an awkward position. The present standoff with the PSU is no exception.

Barrow has communicated this through Financial Secretary Joseph Waight, who wrote to the PSU telling them that the Prime Minister intends to ask the Governor General to amend the Public Service Regulations to give him the power to implement changes in public officers’ salaries.

Barrow did not mince words in winding down his statement. He said, “So, if the PSU persists in refusing even the measly contribution we are requiring, I don’t see how responsible public opinion can allow them to get away with it. Government won’t allow them to get away with it. What we put to them will save only 17 million dollars, all told. That is a drop in the bucket given that we are looking at a larger than 450 million-dollar, pandemic-induced recurrent revenue shortfall for this fiscal year.”

“That’s almost half of the projected revenue collection. This situation, I repeat, cannot be countenanced, and the Government of Belize is going to do what we must. The PSU talks about going to court. Well, I will remind them that no court can oblige the Government to pay what it simply does not have,” Barrow said with finality.