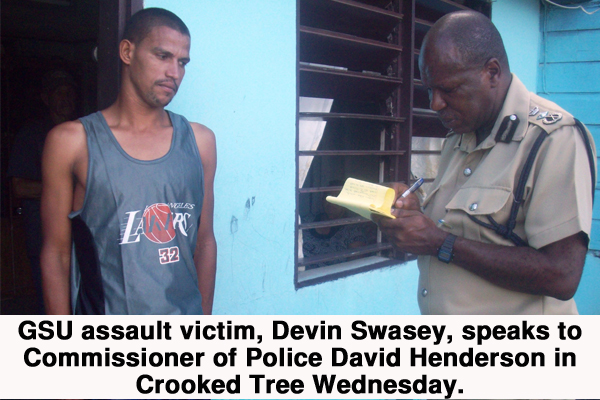 Victims say they were “tasered, beaten, kicked and choked” by GSU officers

The Police Department has commissioned an investigation into another alleged abuse of police authority by officers in the controversial Gang Suppression Unit (GSU).

This time, GSU officers are being accused of disrupting a basketball practice session on the village court in Crooked Tree on Monday night around 8:30, using pepper spray and tazers on as many as 10 youth lying face down and defenseless on the ground, catching and assaulting other youth elsewhere in the village, and re-aggravating injuries sustained by 30-year-old Devin Swasey, aka ‘D-Bud,’ who was recently in the news after miraculously surviving an attack by a crocodile in the Crooked Tree Lagoon.

In all, some 20 young men were allegedly assaulted by GSU officers, including 2 minors.

Swasey said he was on the court with other male village residents practicing basketball for the village’s weekly tournament when the officers arrived and told him and nine other youth to lie on the ground, then asked their names and ages.

The officers, he said, then began to tazer them in their backs, one after the other, while simultaneously demanding information about the leader of the so-called “Gaza” gang. The youth insisted that while they had heard the name, they had no idea who or what the officers were talking about.

The young men also denied having marijuana in their possession when asked, as none of them smoked marijuana.

Swasey told Amandala that he has personally made a report at Internal Affairs in Belize City. After the incident, he was transported to the Northern Regional Hospital in Orange Walk Town, where he was treated, and later released on Wednesday.

Near the basketball court in the village, we caught up with another victim who was still steaming over the indignity he suffered at the hands of the GSU.

This youth, who declined to give his name, said he was not living in the village, but was visiting family when the GSU broke into the house and collared him. He said he was taken to a bushy area, where, in his words, they “(expletive) him up” – he was beaten, kicked, choked around the neck until he passed out several times, and otherwise abused and “brutalized”, all while being questioned about alleged gang activity in the village, of which he said he knows nothing. He briefly lost his voice as a result of the incident and was just getting it back when he spoke with Amandala.

He told us candidly that he believes the village “will get no justice” over this incident, but said nonetheless that he hopes something is done to the officers because what they did was wrong and they had no right to do it.

That sentiment is shared by village elders and Government authorities.

Village Council chairman, George Guest, raised his concerns with us that the council was not even made aware of the GSU’s plans, and called the entire affair “a disgrace.”

Council vice-chair Steve Anthony Perriott, in reporting the incident on Tuesday morning’s Wake up Belize Morning Vibes show on KREM Radio, said that the officers must show “courtesy and professionalism” in their work; they would have gotten more cooperation without acting as they did, he added. He said that as many as 50 persons witnessed the incident and complained to him about it.

Commissioner of Police David Henderson and area representative Edmond Castro came to the village on Wednesday on a “fact-finding mission” in addition to looking at a potential site for a police station.

The Commissioner and Minister Castro spoke personally with several of the victims of Monday night’s incident, including Swasey. Commissioner Henderson told reporters, “Well, it is an allegation. We will be sending in a team from the Internal Affairs. They will be coming in; they will be interviewing persons. A full investigation will be carried out, and whatever needs to be done, will be done. I have not seen any report. It is only an allegation. As soon as it is fully investigated, then we’ll be able to really address it.”

Hon. Castro condemned the incident, and reiterated that, “As far as we know, we don’t have any gangs here in Crooked Tree, no ‘Gaza’ or whatever the names are. We don’t have that out here. So, it’s so unfortunate that this took place here in Crooked Tree, but as the area representative, I am out here to make sure that we get justice, and that this kind of abuse will not be tolerated, period. If you want to interrogate or get some information, you do your job, but there is no need to abuse nobody. We will not tolerate that in Crooked Tree.”