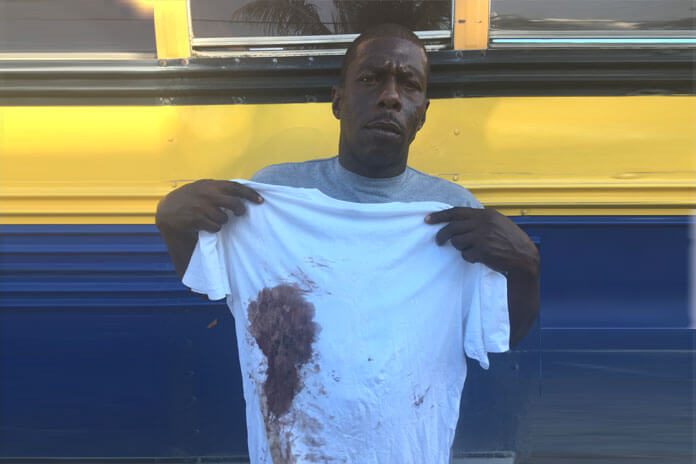 BURRELL BOOM, Belize District, Sat. Nov. 9, 2019– The Belize Police Department’s Gang Suppression Unit (GSU) has been employing unorthodox policing methods from the time it burst on the scene with its officers’ faces covered with masks. The GSU’s new policing methods have come at a high cost to taxpayers in the form of lawsuits that the GSU has lost in the courts.

Yesterday, Friday, some members of the GSU descended on a house in Burrell Boom to conduct a search, but instead of conducting the search, they ended up transporting the caretaker of the property to the Karl Heusner Memorial Hospital for medical treatment after he was shot multiple times at close range with non-lethal rounds from a pump action shotgun.

Around 8:30 a.m., Dean Cain, 38, was in the yard feeding a pit bull when suddenly, he heard someone shouting, “police, police.”

Cain told Amandala that because of the way things are these days, “I didn’t trust, it could be anyone shouting police. It could even be a gunman.”

So, Cain was not taking any chances. The owner was not at home, and he immediately dashed up the stairs and into the house, leaving the pit bull in the yard.

The next thing he heard was the firing of two shots, and the GSU cops pushed their hands inside the burglar-barred door and entered the house.

Once inside the house, Cain said, the GSU officers ordered him to put his hands up.
“I put up my hand in my house, and they shot me in my stomach two times,” Cain told us. “When I dropped to the ground, the officer came over me and gave me couple more shots in my back,” he further said.

“Did the GSU say what they were searching for?” we asked Cain.

“No, they did not say what they were searching for,” Cain replied.

We asked Cain if he is a member of any gang, and if he sells or deals with illegal drugs.

Cain said he is not in any gang, and he does not sell or deal with illegal drugs.

“After they shot me, they took me to the hospital,” Cain explained.

“The doctor at the hospital examined me. They gave me two ultrasounds and two CAT scans. They then gave me some medication,” he said. 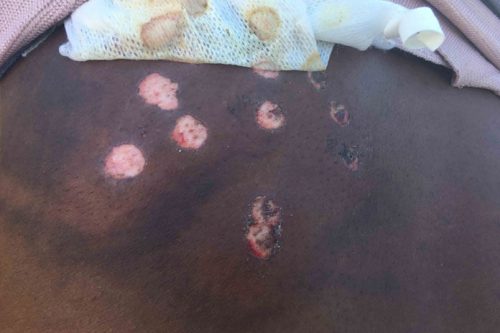 Cain explained that while he was at the hospital, “a GSU officer went there to see me. He asked me if I am going to press charges against the officer who shot me. Apparently, this officer knew that what the GSU did to me was wrong.”

“I told him that I don’t know if I will press charges,” Cain admitted.

We asked Cain how many GSU officers went to the house.

Cain said he did not tally the number of officers, but “they were in two or three vehicles.”
“How did they get into the yard?” we pressed Cain.

“They got in by jumping the fence,” Cain said, “they parked their vehicles beside the fence and jumped over. The dog was barking at them, so they shot the dog, causing him to lose one of his eyes.”

Cain added, “They were trying to make a bargain with me not to press charges against them.”

Cain said that since the incident, he has considered taking legal action against the Belize Police Department for the actions of the GSU officers.

Amandala was able to confirm through a GSU officer that the incident occurred just as Cain described it. The GSU officer we spoke with, however, told us that he advised Cain about his rights to make a report to the Police’s Professional Standards Branch.