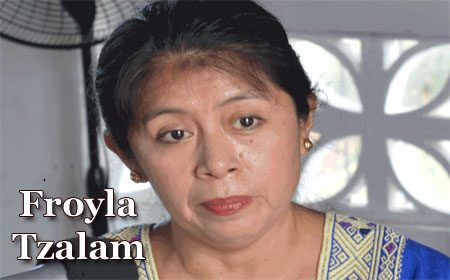 BELIZE CITY, Mon. Nov. 14, 2016–In a press release issued last night, the Sarstoon Temash Institute for Indigenous Management (SATIIM) decried the latest incursion and attack by the Guatemalan Armed Forces (GAF) at the Sarstoon River, in which the army again tried to exert power over Belizean territory, claiming that a protocol must be observed—this despite assertions by Belize Foreign Minister Wilfred Elrington last Friday that talks with Guatemala to agree on a protocol for the Sarstoon, Belize’s southern border with Guatemala, had been at a standstill because the Guatemalans stopped engaging when relations soured over the fatal shooting of a Guatemalan minor in the Chiquibul in April.

That was the same month a SATIIM patrol was stopped, and they were stopped again on Wednesday, November 10, 2016. The SATIIM patrol, which had been mounted to monitor ancestral lands in the area, was met by a GAF team, which told them that they need to understand the protocol in place.

“While SATIIM forest patrols have previously been accosted by the Guatemalan military in this historically contested border area, this is the first time the Mayans were informed they could only enter under Guatemalan military escort,” SATIIM’s release said.

“If you are military, you have special access allowed by the Guatemalan Government. They ask permission. No problem. They are escorted, only if they are military, No fishing, No protected areas. Nothing,” a GAF soldier told the SATIIM personnel.

SATIIM was told they should ask to be escorted, and because they are looking after their forests there, they would be escorted. They were told they would be allowed to proceed in this first instance, only if the GAF accompanied them; but next time, they were told, they would have to seek permission from the Belize government, the foreign ministry. They would ask permission, communicate with the Guatemalan officials and then it would be ok, the soldier said.

Back in April, the GAF accosted a SATIIM patrol, insisting that all visits to the Sarstoon must be reported to them.

“This is a new break/chapter in park monitoring by SATIIM,” the NGO had said. The Guatemalans told them that SATIIM must go to the Guatemalans at their military base and inform them when using the river – both when entering and when exiting.

This time, they were citing a different “protocol”—and one that is of great concern to SATIIM.

Froyla Tzalam, SATIIM’s executive director, told Amandala in an interview today that, “I am in fact more worried by this recent encounter than the first one.”

What was different about this encounter, she said, was the GAF’s calmness in explaining the protocol, and she noted that the spokesperson “knows the process” — an apparent indication that the stance taken by the GAF officer is “not arbitrary.”

“It’s calm as if he had been training to say the following… Somebody told him what he had to say,” Tzalam said, adding that the stance is “more alarming” than the stance taken in the more belligerent encounter earlier this year.

“We as Belize the country of Belize seem to not have established a protocol that is in agreement with the Guatemalans’ protocol… [the Guatemalans] have told us they are in charge,” Tzalam said.

“I don’t want to risk my team being arrested. Being in a Guatemalan prison is no fun—or any prison of any kind,” she said.

She said that the time has probably come for SATIIM to have some kind of agreement to have security personnel accompany them, if there is no other directive that says otherwise. She pointed to the joint patrols undertaken by Friends for Conservation and Development with Belizean security forces; but notably, the Guatemalan Foreign Ministry has publicly opposed that kind of enforcement arrangement in Belize’s Chiquibul, including the carrying of arms by Belizean rangers.

Tzalam continues to appeal for official intervention from the Government of Belize. She told us they did report the incident to Belize Defence Force officials at the Forward Operating Base on the northern bank of the Sarstoon. She does intend to communicate with the Ministry of National Security on the matter.

Chief Executive Officer in that Ministry, Felix Enriquez, told Amandala today that the problem arose because SATIIM did not check in with the BDF at the Forward Operating Base before accessing the area, which, he said, is a requirement which they have publicly announced. He said that anybody can go to the area as long as they check in with the FOB.

However, we pointed to the fact that this issue notwithstanding, the problem for SATIIM is the incursion by the Guatemalans and their exercise of power in an area that is not under their jurisdiction. Had SATIIM personnel encroached on Guatemalan territory, then such a response would have been expected.

“Yeah,” Enriquez replied, but pointed to Guatemala’s position that the Sarstoon River is not Belizean waters and so they do not see it the way Belizeans do.

Enriquez told us that he is awaiting an official report on the incident from the BDF.