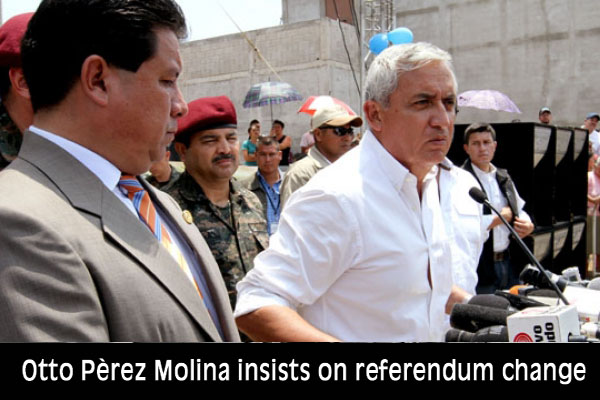 “..if Belize does not improve the conditions or accept the alternatives that Guatemala has offered, they are not going to have a referendum.”

Guatemala president Otto Pérez Molina continues to insist that the date of the simultaneous referenda in Belize and Guatemala, to ask whether voters agree to put the territorial differendum before the International Court of Justice, should be changed from the previously agreed date of Sunday, October 6, 2013.

In statements Perez Molina made this week, he again cited concerns over amendments Belize made to its Referendum Act—a change made months before the parties penned the special agreement in December 2008, to settle the dispute at the ICJ, pending voter approval.

Guatemala has complained that Belize’s law requires a 60% threshold of voter participation in order for the vote to be deemed valid, whereas Guatemala’s law has no such requirement. Perez Molina takes the view that conditions on both sides of the border ought to be equal.

Belizean officials have indicated that Guatemala’s complaints are a red herring to mask internal conflicts they have over the whole ICJ issue.

The Guatemalan official indicated that his administration’s position would be underscored at this Wednesday’s meetings between Guatemala Foreign Minister Fernando Carrera and the OAS.

Pérez Molina has also indicated that the change of date can take place without having the matter go back to Guatemala’s Congress.

Pérez Molina has said that Guatemala would decline moving ahead with the referendum should unequal conditions persist between the neighboring countries.

At a press conference held while he was touring the area of Ixil, in Quiche—the same province where he has been alleged, via witness testimony last week, of instigating the massacre of indigenous tribes—Pérez Molina underscored that the right conditions do not exist for the referendum to proceed—a process which would cost Guatemala 300 million quetzals or over US$30 million.

He is quoted as saying that if Belize does not improve the conditions or accept the alternatives that Guatemala has offered, they are not going to have a referendum.

Guatemala has said that if Belize changes its law, it would then be prepared to agree on another date when the simultaneous referenda could be held. However, they were not prepared to give a timeline.

BELIZE CITY, Thurs. Aug. 13, 2020-- As promised, the Caribbean Examination Council rolled out their CSEC and CAPE exams in July of this year,...
Read more
Headline