Guatemalan minor killed in crossfire, but not by BDF: OAS report 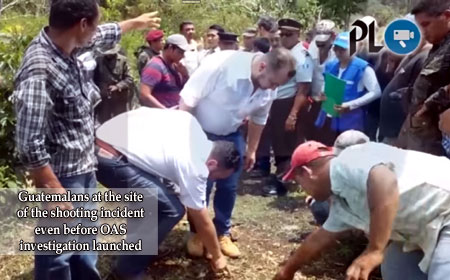 BELIZE CITY, Thurs. Aug. 25, 2016–An “independent and transparent” investigation conducted by Dr. James E. Hamby, retired Special Agent of the US Army Criminal Investigation Command, and Dr. Patricia Rosa Linda Trujillo Mariel, Head of Criminalistics of Mexico’s Federal Police, has revealed that Julio René Alvarado Ruano, the Guatemalan minor who was shot on Wednesday, April 20, 2016, during an enforcement operation led by the Belize Defence Force (BDF), was not killed by military fire, as Guatemalan authorities had alleged.

It appears that the bullets which injured the minor came from a .22 caliber weapon and a shotgun – not from a high-powered military rifle, according to a copy of the report leaked to KREM News.

Commander of the BDF, Brigadier General David Jones, told the media earlier this week that he expects his soldiers would be exonerated by the findings.

The OAS investigation, the result of which is being presented to Belize today by Magdalena Talamas, Special Representative of the OAS Secretary-General for Belize-Guatemala Affairs, revealed that Guatemalans visited the scene of the shooting and removed evidence, well in advance of the requisite verification and investigation process set out in the Confidence Building Measures between Belize and Guatemala, signed under the auspices of the Organization of American States.

In fact, images shown in the Guatemalan press reveal that a contingent of Guatemalans, including their military, crossed into Belize the day after the incident, and visited the site where the incident took place. The investigative report indicated that the Guatemalans removed cartridges which apparently came from the BDF weapon, of which they had photos.

However, the investigation found that there were bullet holes in two branches from shots fired from the spot where Ramirez and his sons were, towards where the joint patrol was. The patrol included members of the Belize Defence Force and Friends for Conservation and Development (FCD), the NGO which co-manages the Chiquibul National Park.

Amandala readers will recall that when Alvarado was killed, the Guatemalan government amassed thousands of its elite special forces, the Kaibiles, at that country’s western and southern borders in Belize, fueling fears of a military invasion amid allegations that Belize’s military had “murdered” the minor in what they had condemned as a “cowardly act of aggression.” The story went viral in the international press, as Guatemala portrayed Belize as aggressor and human rights violator.

The independent investigation now confirms what Belizean officials have been saying all along, despite Guatemala’s rush to judgment—that Guatemala’s actions were disproportionate and unfounded. The official account from Belize which was conveyed to that country’s president, Jimmy Morales, indicated that the shooting happened when the Belize patrol was fired upon under the cover of night, and, as expected, fired back in self-defense.

Belize Prime Minister Dean Barrow had told President Morales, while the two were in the US, that “the BDF patrol had come under fire first, and had responded in self-defense, firing in the direction from which they had been shot at.” Barrow had also indicated to the Belizean media that he had “made the further point that the civilian members of FCD, who had accompanied the patrol, confirmed the BDF’s version of events.”

The report of the independent investigation, which is expected to be raised in Parliament when it meets tomorrow, indicates that although shots were fired by the BDF, none of those shots resulted in any injuries to the Guatemalans.

The report, which collated information from the autopsy report, interviews, photographs, lab exams results, police reports, and other documents, explained that the incident occurred 562 meters east of the Belize-Guatemala border. Julio Alvarado, who was 14 and not 13 as previously stated, was killed, and his father, Carlos Alfredo Alvarado Ramirez, 48, and brother, Carlos Alberto Alvarado Ruano, 12, received minor injuries.

The father had claimed that at about 6:15 p.m., when they were crossing close to a maize field (after going to plant pumpkin and beans at a place they called their “job site”), FCD told them, “Don’t move!” and began to shoot at them. He went on to tell the investigators that he ran so fast, he saw one of his sons covered with grass and the other lying in the road lifeless.

However, the FCD rangers said that the incident actually occurred around 7:00 p.m., when it was already dark. They said that they were in a resting position at the corner of the maize field when people came and began flashing a light. They were told to, “Stop,” and that was when, according to the ranger, they were shot at. One ranger said in response, he fired four shots from his rifle; the other said he fired two shots from his .22 caliber pistol.

The account given by the BDF was that he was trying to contact his base to report that he had arrested a Guatemalan farmer, Jose Maria Antonio Reyes, 33, who had been conducting illegal activities in the area. He said that at this point, he ordered the FCD rangers to stay at the position where they were resting, “to prevent the village people [from] trying to rescue the farmer.”

The exchange sounds eerily familiar to that which resulted in the murder of Belizean Special Constable Danny Conorquie in September 2014, after the Belize law enforcement team operating in the Caracol area had confiscated horses used in illegal logging. It is believed that Guatemalans returned and executed Conorquie.

Chief Executive Officer in the Ministry of Foreign Affairs, Lawrence Sylvester, told our newspaper that the investigation into those incidents has begun and work will continue.

The April incident underscores the need for further efforts to address the problem of incursions by Guatemalans into the Chiquibul-protected areas, where they farm, cut logs, mine for gold and even extract archaeological relics.

Rafael Manzanero, executive director of FCD, told Amandala that he has not yet seen the OAS report. He told our newspaper that their rangers are always at risk and it is necessary for their rangers to be armed. He said that even way back in 2007, when they started to operate in the Chiquibul, they were advised to be armed.

The FCD rangers fired, he said, “because they came under fire.” He emphasized the need for continued cross-border collaboration to address the problems being encountered in the area.

“It is a very unfortunate situation, admittedly, to all of us who are involved on the ground… it is something that we never would really want to occur,” Manzanero said.