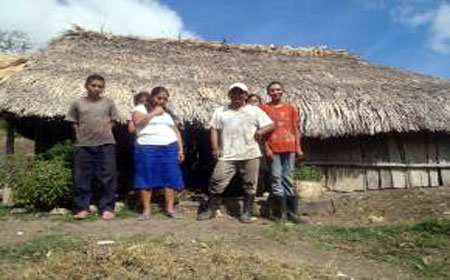 CHIQUIBUL, Cayo District, Thurs. Sept. 1, 2016–Guatemalans opened fire on a Belize Defence Force (BDF) reconnaissance patrol at around 11:25 on Wednesday morning, August 31, when the team was headed to El Retiro to check if a group of 15 illegal Guatemalans settlers—11 adults and 4 children—who were issued an order to leave (OTL) just over a week ago, had actually left the country, according to Commander of the Belize Defence Force, Brigadier General David Jones.

Jones told Amandala tonight that they do not know whether the people who opened fire on the BDF (while they were within the Chiquibul National Park, approximately 259 meters east of the border) are the illegal settlers. He said that the shots were fired by persons who were hiding in the bushes and the BDF returned fire and retreated.

An official statement just released by the Government of Belize explained that, “It has been reported that unidentified persons within the Chiquibul initiated gunfire as the BDF patrol approached the location where the illegal settlement was discovered. The BDF patrol returned fire in self-defense and withdrew to safety.”

It added that no military personnel were reported to have sustained any injury and there was no indication of any other casualties.

The Organization of American States (OAS) is being asked to assist with the matter. The OAS Office near the Belize-Guatemala border has been asked to coordinate logistical arrangements between both the Belizean and Guatemalan law enforcement agencies, and to witness compliance with the official order to leave, the Government release said.

National Security officials had informed us on June 13, 2016, that a joint patrol was conducted in the areas of Valentin Camp, Retiro, Cebada and Sapote during the period 29 May, 2016, to 9 June, 2016, and they discovered and destroyed 650 marijuana plants, 50 acres of pumpkin and 100 coffee plants. They also discovered that 6 families consisting of 20 illegal Guatemalan migrants, including children, were found to be living in Retiro, on the Belize side of the border. At last report, the number was down to 15.

Official information indicates that the BDF patrol was following up on whether the Guatemalans had complied with the OTL (order to leave) issued on 22 August 2016 to illegal settlers within the Chiquibul National Park.

Jones said that the OAS had verified months ago that the Guatemalans had been living inside Belize.

The incident comes less than a week after the OAS formally presented the results of an independent investigation into the shooting death of a Guatemalan minor in April. According to reports from Belizean authorities, the minor was killed in crossfire which ensued after the BDF came under armed attack while investigating illegal farming activities in the national park. A commission of investigators from the US and Mexico found evidence that shots were indeed fired in the direction of the Belize patrol.

The OAS is also investigating two other incidents—the first in which Special Constable Danny Conorquie was shot to death at Caracol in 2014 and the second in which BDF Sergeant Richard Lambey was shot this March; however, those investigations are incomplete.

“The only way for this to stop is for the Guatemalans… to stop their people; we can’t stop the people from coming in,” Jones told Amandala.

The Commander said that the encroachments into the Chiquibul are linked with poverty on the other side of the border which drives Guatemalan peasants into Belize for their survival, he said, to get “something to eat.”

Asked about the connection between the unrelenting wave of incursions and organized crime, Jones said that the Guatemalans are evidently being encouraged to come into Belize, and it is possible that they are being financed with the proceeds of organized crime.