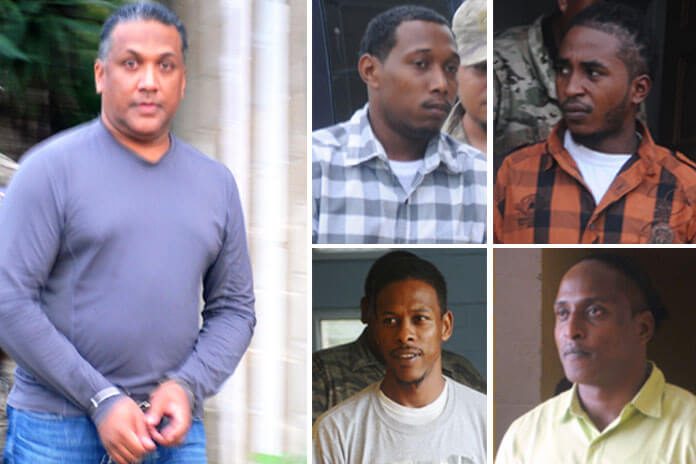 “There was a mountain of reliable and credible circumstantial evidence,” said Justice Moore 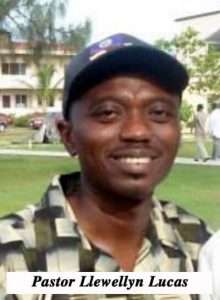 That would be the last time he was seen alive. That same evening, Pastor Lucas’ head was found wrapped in a plastic bag inside a bucket in the covered pan of Mason’s black Ford-150 pickup.

The discovery was made quite unexpectedly, by Corporal Holly Vasquez, and it triggered one of the most sensational murder cases in Belize’s history, one that gripped the attention of the nation throughout its twists and turns as charges were laid and the case against Mason and his four other co-defendants meandered slowly through the criminal justice system.

Today, 266 days after the trial on indictment started on March 12 for William “Danny” Mason, 49; Ernest Castillo, 23; Keiron Fernandez, 32; Terrence Fernandez, 34; and Ashton Vanegas, 27, for the murder of Llewellyn Lucas, Belmopan Supreme Court Justice Antoinette Moore told a packed courtroom that was so silent you could have heard a pin drop, that all five accused men were guilty of the crime for which they had been charged.
Justice Moore has reserved sentencing for a date to be announced.

The verdict phase of the trial began right after Justice Moore made the unprecedented decision from the bench to announce that all media representatives were required to turn in their cell phones, to the court police.

In beginning the delivery of the verdict, Justice Moore explained that what she was about to read was a summary of her 100-page judgment.

The judge said that the 5 elements of the offense of murder must be proven beyond a reasonable doubt, before someone can be convicted for the offense.

Justice Moore said there were no eyewitnesses of the murder, that the prosecution’s case was based on circumstantial evidence, and electronic and video evidence.

She said the court has accepted that Llewellyn Lucas is dead; his head was identified by two of his relatives. With that fact established, Justice Moore turned to the question of the cause of death, which could not be determined by Dr. Mario Estradabran, the Police Department pathologist.

Justice Moore said that Mason’s attorney, Dexter Todd, urged the court to base its judgment on a 1976 case from Guyana which deals with cases of murder where the cause of death could not be established. In this case, however, Justice Moore noted that it could be inferred from the decapitation of Pastor Lucas that he died from harm, and that there was an effort to conceal the head.

“I am satisfied that the Crown has discharged its burden that the deceased died from harm,” Justice Moore said.

“There is a substantial amount of circumstantial evidence, in this case,” Justice Moore declared before turning, to the evidence of the Crown’s first witness, David Dodd.

Todd testified via video link from somewhere in the United States. In his testimony, Dodd told the Court that he took Pastor Lucas to visit Mason, along with Pastor Alvis Wright.

Dodd explained that they were kidnapped, tied up and taken in the back of a pickup. Dodd described, speaking to someone who spoke in a “cultured” voice. Eventually, Dodd testified that they were released and he was told not to mention to anyone what had happened.

Franscisco Yat, Mason’s employee, testified that he saw the deceased at Mason’s house after lunch time.

Justice Moore observed that Yat was a nervous but truthful witness.

Another prosecution witness, Pastor Richard Smith, whom Mason had owed some money, went to Mason’s ranch the same day and took three police officers with him. Smith left the farm without being paid.

Sergeant Ismael Westby was at Sancho’s Bar during the evening when Mason and his workers arrived in Mason’s black Ford F-150. There had been a report of a robbery which involved four men of Creole descent, and Westby attempted to search the black pickup and was met with resistance.

Corporal Vasquez was investigating the robbery and Westby called him by phone.
Vasquez came, and while he was searching the pickup, he saw the head in the bucket. He called for backup immediately.

Turning to the video evidence, Justice Moore said that she was satisfied with the authenticity of the video. The video evidence was extracted from three surveillance cameras on Mason’s farm.

Justice Moore said that the video evidence had confirmed what the witnesses, Yat and Dodd, had testified — that they had seen the deceased at the farm.

Justice Moore observed on the video that Pastor Lucas was walking with his hands behind his back. “I infer from that that his hands were tied,” Justice Moore said.

Justice Moore said that the defense argued that the videos were not clear and the court should not rely on them, but she observed the joint conduct of the five accused men after she studied the video recordings carefully.

Justice Moore said that she found the phone record of a phone call from Mason to Richard Smith to be revealing.

“The reason the 5th accused [Mason] did not want the police to search his truck is that he knew what they would find,” she said.

Corporal Vasquez testified that he had observed blood stains on three out of the five accused men.

“I am fully satisfied with the integrity of the DNA evidence,” Justice Moore said.

When forensic technicians went to Mason’s farm, they found ashes from a fire which was still smoldering. In that burn-pit, human bones were discovered. The National Forensic Sciences unit examined the bones and confirmed that they were human.

Justice Moore said that there appeared to be tight security at the farm, and it was difficult for her to see how anyone could enter the farm and leave human bones.

Justice Moore said that the prosecution’s evidence was strong and reliable. She said that three of the accused called no witnesses, and Mason made an unsworn statement from the dock.

Terrence Fernandez gave an unsworn statement saying that he worked at the farm and that he did not kill the deceased, but he called no witnesses. He also said that he had never previously been in trouble with the law.

Justice Moore, however, said that good character is not a defense.

The thrust of Fernandez’s statement was that he had no knowledge of the killing of the deceased, but Justice Moore observed that he was seen in the video.

In his unsworn statement, Mason told the court that he is a businessman who came to Belize to find opportunities in agriculture.

Mason called one witness and the witness’ statement was read into the record of the trial. The witness whom Mason called was a US Embassy employee who was stationed in Belmopan.

Mason’s US witness said he was called by Dodd, a US citizen. Mason told the witness that he needed assurances for his (Mason’s) safety.

Justice Moore said, “I give no weight to the statement of the 5th accused [Mason] that he has no hand in the killing.”

“It is not possible that someone else had access to the truck and planted the head. I find that the Crown’s evidence is compelling and I accept most of it as true,” Justice Moore said.
Justice Moore observed that the other four accused men had no control over the vehicle. They were passengers — “but this is not relevant in joint enterprise”, she said.

“There was a mountain of reliable and credible circumstantial evidence. When the DNA evidence is excluded, the evidence would still lead to the conclusion that the five men killed the deceased,” Justice Moore reasoned.

“If the deceased had gone missing, a case could still have been made against the five accused, because the deceased was in their company,” Justice Moore said.

“Based on my consideration of the evidence, the five accused carried out the heinous crime,” Justice Moore concluded.

Justice Moore commended the investigating officer, Corporal Vasquez, and the scenes of crime technicians who “did meticulous work.”

Justice Moore ended her judgment by calling each of the five accused, by name, to “to stand up” and then she pronounced, “I am satisfied that the Crown has proven beyond a reasonable doubt that you are guilty of murder.”

There was no verbal reaction from the convicted men. A couple of them remained standing after the judgment was read, until Justice Moore said, “you can sit.”

Following the verdict, two of the attorneys on the case spoke to reporters. Attorney Bryan Neal, who represented Keiron Fernandez, remarked, “I feel for my client. He has been convicted of a very serious offense. The court has obviously considered all the evidence, and in its view, all 5 defendants have now been found guilty of murder.”

Neal was asked if he and his client discussed the possibility that his client would appeal the verdict.

Neal replied, “Well, any good lawyer is to indicate to their client that you might be convicted … I don’t want to get into whether or not [his client will appeal] — that is for him to—you will know within 21 days of the conviction. The Court of Appeal Act requires him to file a notice, and I believe that he seems to want to retain counsel. I haven’t been retained for the appeal. I was only appointed by the court, but it seems from my assessment that he might want to appeal the decision. He’s not satisfied.”

Attorney Norman Rodriguez, who represented Ashton Vanegas, was asked if he thinks the judgment would be upheld if the case is appealed because there is DNA evidence and other strong evidence. Rodriguez remarked that if the case goes to a higher court, “there will be grounds for appeal.”

William “Danny” Mason was represented by Guyanese attorney Dexter Todd. Todd, however, was not present for the guilty verdict against his client, and attorney Michelle Trapp was holding brief for him.