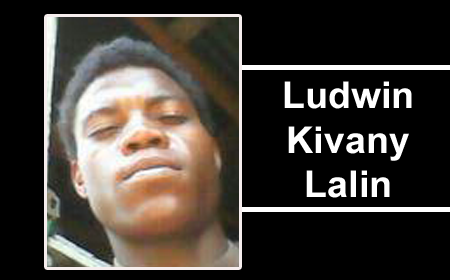 However, at around 6:00 p.m. today, less than 24 hours later, one of the participants in those activities, a stepfather to two children, was fatally gunned down in that general vicinity not too far from home.

He has been officially identified as naturalized Belizean Ludwin Kivany Lalin, 19 – originally from Guatemala.

Information to our newspaper is that hours before his death, he was warned via a telephone call that his life was in danger.

An unperturbed Lalin had just bought some onions and sweet peppers from a store at the corner of Curl Thompson Street and Jane Usher Boulevard Extension and was about to mount his bicycle when 15 shots roared out.

Lalin was struck multiple times and died on the scene. A pool of blood and his Jordan slippers were left behind after his body was transported to the Karl Heusner Memorial Hospital (KHMH) in the pan of a police pickup truck.

Scenes of crime personnel collected 10 expended shells from the scene.

Our sources revealed that a man with dreadlocks was seen fleeing the area with a gun in his hand.

However, police have not yet made any arrests.

The family of the slain teen arrived on the scene in an extremely sorrowful state. His father, Roberto Lalin, 41, told our newspaper that after hearing the gunshots, he was on his way to buy a gallon of water when he saw his son lying dead beside his bicycle in front of the shop.

He told us that he observed his son with a single gunshot wound to the left temple.

He told Amandala, “They just tek wa innocent, ah woulda seh innocent person, because my son…I could vow to dis, my son nuh kill nobody yet. Ah jus congratulate the young bwai who do dis. Ah hope deh gain sohnting…”

According to the senior Lalin, he and his son recently celebrated their birthdays on April 9 – both were born on that day..

“He was my birthday gift…suh we celebrate fu we birthday about one month ago,” he told us.

Lalin is the second person to be gunned down in the Port Loyola area since the April 28 murder of taxi driver Santiago Rodriguez, 48.

Hours before Lalin’s murder, Telswin Lara, 30, was shot in the lower back, also in Port Loyola.

The young Lalin leaves behind three brothers. His father is asking for assistance to bury him. Those wishing to do so can contact 626-3956.