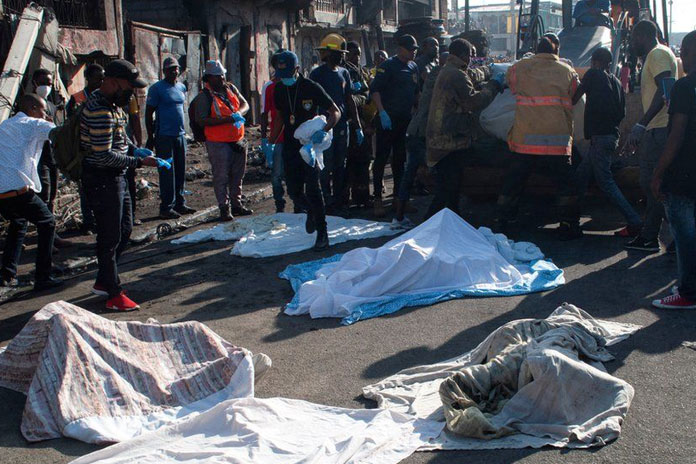 HAITI. Wed. Dec. 15, 2021 (BBC)– More than 60 people have been killed after a fuel tanker exploded in northern Haiti, officials say.

Reports say the vehicle was involved in an accident in the city of Cap-Haïtien, and the victims had been trying to gather leaking fuel when it ignited.

Local hospitals have been overwhelmed by those injured in the blast.

Prime Minister Ariel Henry said the entire Caribbean nation was grieving after the accident, as he declared three days of mourning.

“I learned, with desolation and emotion, the sad news of the explosion last night in Cap-Haïtien,” he wrote on Twitter on Tuesday.

Pictures posted on social media show an intense blaze at the scene of the accident in Haiti’s second-largest city. One witness described the blast site as “hell”.

Dozens of people were injured in the explosion and local medics said they feared the death toll would rise.

“We don’t have the ability to treat the number of seriously burned people,” a nurse at the Justinien University Hospital told AFP news agency. “I’m afraid we won’t be able to save them all.”

“We need human resources, and also material resources, namely serum, gauze, and anything that can be used in case of serious burns,” Mayor Yvrose Pierre said.

The government announced that it was setting up field hospitals in the area to help those affected, and Prime Minister Henry travelled to the scene on Tuesday accompanied by doctors and health workers.

“It is with a torn heart that I see the critical condition of some of our compatriots,” he said after visiting a local hospital.

Deputy Mayor Patrick Almonor earlier told reporters the victims he saw when he visited the site of the blast had been so badly burned they were impossible to identify.

He added that about 20 houses in the area had also been set on fire by the explosion.

The incident comes as Haiti is experiencing a severe fuel shortage as powerful gangs have seized control of much of the fuel distribution around the country. Haiti is also in the grip of a major economic and political crisis in the wake of President Jovenel Moise’s assassination earlier this year.

Full article can be viewed at: https://www.bbc.com/news/world-latin-america-59650802
First published by BBC news