Home Highlights Beyond the Horizon 2017
Highlights 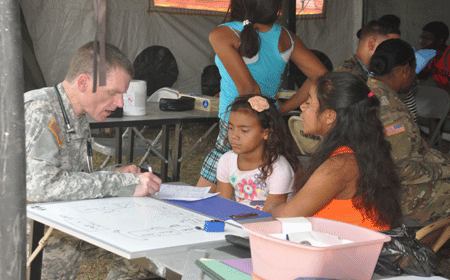 LADYVILLE, Belize District, Sun. Apr. 9, 2017–A throng of people went out early on Sunday morning, April 9, to seek the medical attention that is being provided by United States soldiers from the US Southern Command, beginning at around 6:00 a.m. and continued in a steady stream throughout the day.

The services were provided under an initiative dubbed, Beyond the Horizon 2017, a medical mission provided on the Ladyville football field, which was transformed into a makeshift medical facility.

Amandala spoke with Sergeant John Evenridge, the public affairs specialist for Beyond the Horizon, who told us that their program is a partnership between the US Southern Command and the Belize Government.

“The Ministry of Health determines what services we should provide,” Evenridge said.

Beyond the Horizon will spend some 11.5 million dollars in Belize during the three-month period spanning March to June, Evenridge disclosed.

“We used a lot of local contractors to help build living quarters for the approximately 1,900 servicemen and women from the US Army, Navy, Air Force, and Marines that will be arriving in the country on a rotation basis”, Evenridge explained. The soldiers are housed at the Belize Defence Force (BDF) Price Barracks compound.

Lieutenant Colonel Erin Mary Weather, a nurse practitioner and direct patient care specialist who is with the Utah Medical Command, told Amandala that the areas of health that they will be focusing on are women’s health, pediatrics, general health, dental health and vision care.

The clinics are scheduled to last for two weeks, during which there will be 10 clinic days.

Colonel Weather said that they have detected and treated some infections in patients and have looked at some chronic issues for which they were able to give advice.

Evenridge said that after Ladyville, the next stop for the clinic would be San Ignacio and then Dangriga.
An estimated 200 persons from the Ladville area accessed the free medical services provided by Beyond the Horizon on Monday.

Ladyville chairlady, Dian Wite, said that the village provided the community center and chairs, and drinking water for the patients.

Wite said that she is grateful for Beyond the Horizon coming to Ladyville, which has a population of between 20,000 to 30,000 residents.

Wite said that because Ladyville is at the center of the Belize District, the initiative will cater to all the surrounding villages.