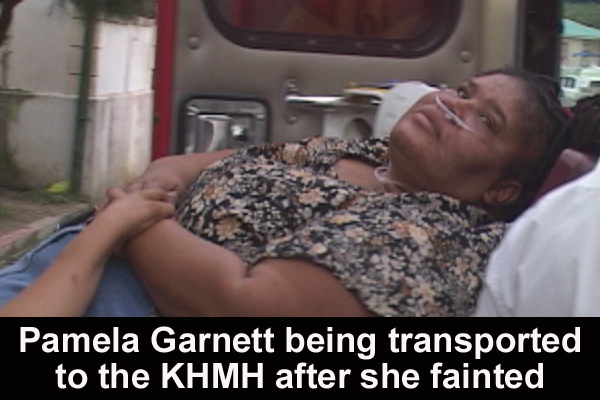 Raheem Requeña, 19, was murdered on December 19, 2012 — shot eight times as he was riding his bicycle on Kut Avenue around 8 p.m. He was a fourth form Excelsior student, and at the time no one could figure out why anyone would want him dead.

Police have been investigating, and on Monday they announced that they had a killer. They charged Cassian Gentle, also known as Cassian Bennett, who is considered a member of the Southside gang. But Police say Gentle did not commit this murder alone.

Late this evening in Belize City’s Magistrate Court they charged Gentle’s stepfather, the well-known street figure Jermaine “Horse” Garnett, 30, with the murder of Raheem Requeña. They also charged Kenneth Barrow, a resident of #4 Gill Street, with the same murder.

Due to the nature of the offense none of the men were offered bail and they were remanded to the Hattieville Prison until January 30, 2013, when they are scheduled to reappear in court.

But this was no ordinary murder case. That’s because just before Horse Garnett was charged, his wife, Pamela Garnett, 42, was arraigned inside the court of Magistrate Hettie Mae Stewart, for the offense of attempting to suppress evidence in the murder of Raheem Requeña.

Police say that on December 23, Pamela Garnett allegedly approached a person believed to be a crucial witness in the murder of Requeña, and offered to pay the person $5,000 for her not to testify.

The Director of Public Prosecutions, Cheryl-Lynn Vidal, appeared in court herself today where she made objections to bail being offered to Pamela Garnett on the following grounds: (1) the seriousness of the offense; (2) great concern for the person on her side of law enforcement; (3) the fact that the evidence she was attempting to suppress involved men who are charged with murder; and (4) the likelihood that, if offered bail, Pamela Garnett may continue to interfere with the complainant.

DPP Vidal also argued that, given the gravity of the case, the complainant’s life may well be in danger.

Attorneys for Pamela Garnett, Anthony Sylvester and Richard “Dickie” Bradley, argued that even if Garnett were to be found guilty of the charge, it is a misdemeanor offense. Bradley advanced that so far the charge is just an allegation. There is no evidence that she did it, and the law is not to punish the persons before the trial comes up, argued Bradley.

Bradley then offered that in granting bail to Garnett, they could impose conditions, one of which would be to stay away from the complainant.

DPP Vidal countered that the charge was for interfering with a witness. “This is interference in a murder case in an effort to frustrate the Crown’s case. We have to act in the best interest of the witness,” said the DPP.

Magistrate Stewart then requested a 10-minute adjournment to review the arguments presented by both sides. Upon her return, the Magistrate declared: “I, within my discretion as the Magistrate, have decided to deny bail and remand Ms. Garnett.”

Pamela Garnett was remanded into custody until January 11, 2013.

Upon hearing the Magistrate’s decision, Pamela Garnett burst into tears, and could hardly contain her emotions as she was led from the court.

And this is when things got crazy.

While being led to the holding cell at the court, Garnett started complaining of chest pains and difficulty breathing. Her mother, who was beside her, became hysterical when she (Pamela Garnett) began to hyperventilate.

News of Garnett’s ailment leaked outside, where a crowd of family and friends had gathered to lend their support. Upon learning of her condition, the crowd began demanding that an ambulance be called.

But, according to Pamela Garnett’s supporters, the officers on duty were too slow to act, and they exploded in anger. The tension in the area heightened when Garnett’s mother ran out of the building shouting: “Oh God, Pamela dead, Pamela dead!”

During her arraignment, Pamela’s husband, Jermaine Garnett, was locked up in the holding cell with her son, Mark Vernon, aka Mark Gentle, who was also charged with attempting to suppress evidence in the Raheem Requeña murder. When they learnt of her condition, the duo began violently shaking the bars of the cells.

When the ambulance finally arrived, the BERT attendants worked on Pamela Garnett, stabilizing her, before she was placed on a gurney, and taken to the KHMH.

Police say Mark Vernon, 24, threatened the witness in the Raheem Requeña murder case – a witness the DPP considers crucial to her case. He was also denied bail and remanded to the Hattieville Prison until January 11, 2013, when he is scheduled to reappear in court.