Home Headline “I am a poor man!” - Hon. Castro
Headline 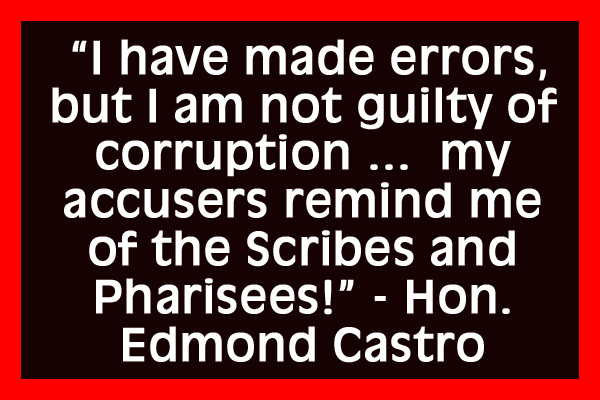 For the first time since the Belize Airport Authority cheque scandal came under public scrutiny, the man at the center of the controversy ventured to tell his side of the story at today’s Sitting of the House of Representatives.

After weeks of being under consistent fire and being completely mute after it was revealed that several questionable cheques were issued and/or sanctioned by the now ousted Belize Airports Authority (BAA) Board of Directors either to or on behalf of Transport Minister of State, Hon. Edmond Castro, he finally took the opportunity to respond to the allegations, and sought to both defend and explain his actions.

During the Special House Sitting, Castro read from a prepared text in defense of his premise that his actions should not be considered corrupt, quoting even from the Bible while making a public plea that he is just “a poor man”. Castro explained, “Mr. Speaker, I have been accused of corruption. The accusations are coming from the Unions, the Opposition, the media and other members in the public. The allegation is that the Board of Directors of the Belize Airport Authority wrote a number of cheques in my name or on my behalf. The BAA was under my portfolio; it is those circumstances which according to my critics constitute corruption.

“Well, Mr. Speaker, before I answer my critics, I went to the dictionary to find out the real meaning of corruption. Corruption, as defined in my dictionary, is as follows: ‘impairment of integrity, inducement to wrong by improper or unlawful means as bribery or departure from the origin or from what is pursued to be correct’. Based upon that definition, it would have to be proven that I have done something wrong or immoral or to be guilty of corruption, but the only thing that is being said is that the Board of Directors of BAA has issued a number of cheques in my name or on my behalf or to persons associated to me. There is no suggestion that the Board did not have the lawful authority to issue cheques, nor is there any suggestion or evidence that I had any influence over the board by any improper means to issue cheques. There is no suggestion that I had forced the Board to issue cheques or that I had extorted cheques from the BAA’s office or the Board.”

During his 20-minute presentation, Castro stressed the costs of funeral expenses and justified the reasons for which the cheques were issued to either him or his associates.

Although some of the expenses have admittedly been personally or politically incurred, he maintained that it is a typical practice for organizations, such as BAA, to provide monetary assistance from what is known as a ‘humanitarian fund’ and insisted that nothing he did was corrupt.

“One of those cheques was issued to help defray expenses associated with the death of my dear mother, Mister Speaker. I am deeply saddened and disappointed that the word of the assistance had been made so public and that it has become so controversial. I readily accept and admit that BAA wrote a cheque to help me to defray some of the expenses associated with the death and burial of my mother. This is no corruption, Mr. Speaker”, stated Castro.

Taking on the persona of a clergyman, the Minister went as far as to compare those who have censured him to the Pharisees and Scribes of the Biblical ages. Castro cited, “The outcry over the cheques issued by BAA on the part of the opposition, the media and BNTU reminds me of the righteous indignation on the part of the Scribes and Pharisees, who – recounted in the gospels of Saint John chapter eight verses one to nine – took to Jesus a woman accused of committing adultery and said to Jesus, ‘This woman is taken in adultery, in the very act. Now Moses in the very law commanded us that such should be stoned to death. But what suggests thou?’ And Jesus said to them, “He that is without sin among you, let him cast the first stone.”

Despite the fact that he took jabs at the members of the Opposition, no stones were thrown in his direction at the time.

Castro went on to say, “I am not saying that I have not made errors as a Minister of State. None of us is inflammable—infallible, hello—but I assure you, Mister Speaker, that while I can be guilty of making errors, I am certainly not guilty of corruption, Mister Speaker.”

To top it all off, Minister Castro declared himself to be a “poor man”, alleging that funeral expenses amount to almost twice what he earns monthly. He proclaimed, “In my case, Mr. Speaker, although I am a Minister of State, I am a poor man. Mr. Speaker, I make a ‘take home’ of approximately $2,900 per month. I also have my own family to take care after too, Mr. Speaker.”

While a few jovial members of the Opposition found those statements laughable at the least, today the Prime Minister, Hon. Dean Barrow, made no diversion from his initial stance, and maintained that what the Junior Minister did cannot be classified as corruption, and stuck to his defense of the embattled member of his administration – even in the face of repeated criticism by the Opposition.