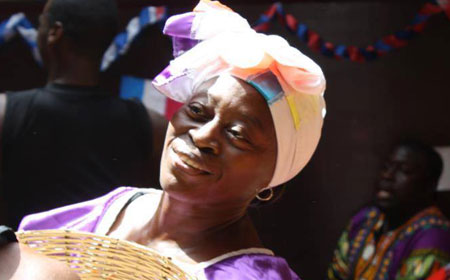 BELIZE CITY, Wed. July 8, 2015–An illustrious Belizean star, Rosita Baltazar, the iconic dancer who has performed for audiences at home and abroad, succumbed to cancer on Monday night, after her extensive battle against the debilitating disease ended peacefully at her home.

First signs of her illness were observed in 2012, just before she was due to travel to Paris with a team from the Belize National Dance Company, which she co-founded back in 1990.
Baltazar, 55, had since been on treatment, but the breast cancer, which had gone into remission, later resurfaced. She fought hard while receiving chemotherapy, but about a month ago, things took a turn for the worse.

We understand from her dance colleague, Althea Sealy—to whom Rosita was like a soul sister—that Rosita passed away between 11:30 and 12:00 on Monday night, July 6.

Sealy said that it is requested that sympathizers, instead of sending wreaths, make donations to the Belize Cancer Society, through which Baltazar received chemotherapy. Donations can either be placed in a sealed envelope and dropped in the collection basket at the funeral or delivered directly to the Cancer Society.

Since Baltazar’s passing, an outpouring of condolences have been expressed, testifying to the major impact she has had on the lives of thousands of Belizeans, and especially the youth, through dance.

The Belize National Dance Company wrote on Baltazar’s Facebook page that she was “a truly exceptional dancer, teacher, choreographer…”

Baltazar received a special award at the Lord Rhaburn Awards Show in December 2004 and she was recognized as Dance Choreographer of the Year for at least 6 consecutive years in the Children’s Festival of Arts.

“Belizean dance has lost an icon today and we will never forget her energy, dedication and passion onstage and offstage,” they said, lamenting the passing of Miss Rosa. “We love you and will remember you always.”

“Belize mourns death of dancer Rosita Baltazar: A friend and relative whose dancing creativity has excelled beyond earthly boundaries. Rosita’s magnetic art [of] dancing induces a spiritual connection to that of our Garifuna heritage, a sense of flirting back in time with the ancestors…,” wrote Elma Gabriel.

“I am one of the little ones you taught and gave a lasting memory even now that I am grown. Rosita got us Holy Redeemer girls ready for Festival of Arts in the 80’s and taught my now 19-year-old daughter ballet. Her legacy of talents will live on,” Sheila Neal shared.

Joy McKoy says, “Her beautiful smiles say it well: she truly enjoyed doing what she did best… Dance!”

Indeed, her passion for this artistic form impelled her to position herself among the best of the best during her dance career of almost four decades.

Rosita first began dancing while attending St. Peter Claver Primary School in Punta Gorda. Being from the south where cultural dances are still a mainstay, Rosita was not yet exposed to classical ballet. As a teen, Rosita Baltazar attended St. Peter Claver College (now the Toledo Community College), where she also maintained her interest in dance until her family migrated to Belize City, where she attended the Leo Mar School of Dance five years later, the dancer had recounted to us, back in 2005.

Althea Sealy, who won over Rosita Baltazar from Leo Mar Dance Company, established a bond with the dancer in the late 1980s. Since then, the team of dancers has been spreading their wings as they have represented Belize in the finest artistic form wherever they appear on stage.

The Dance Company began to attract new people, and with its expansion, they were able to branch off into the senior and junior divisions. Baltazar worked with the younger dancers.
Sealy said that over the years Rosita’s creativity excelled greatly, and the older she got, the more creativity came out of her.

“She spread her wings so wide that [she showcased] whatever form of dance she could capture, and she extended into folk and classical,” Sealy recounted.

She saw Baltazar as someone always searching and wanting to know more, even if on her own.

“She took all of that [which she learned] … and shared it with the entire Belize,” said Sealy, noting that Baltazar was determined to dance fulltime.

“This was always her dream. From she was a girl in primary school. She would be in almost every play, every activity. You could tell from early that she had artistic inclination,” she added.

Her most far-reaching contribution to dance is thought to be her work with children. Sealy said that even if the persons she taught never became dancers themselves, Rosita left a tangible, moral imprint in their lives.

“A lot of the children will say that it is because of her that makes me who I am. She instilled something in them,” Sealy added.

Baltazar continued to actively dance onstage until 2014. Her last big performance was “Our Father” in 2014 – a public performance to say thank you to the Almighty for carrying her through her struggle with cancer.

Over the last two years or so, Baltazar, who remained private about her medical struggles, focused more on her spirituality, spending a lot of time involved with Holy Redeemer Cathedral, where she immersed in her new passion for liturgical dance.

Baltazar, a naturalized Belizean who was born in Honduras on August 16, 1960, truly lived her passion and shared her gift with Belize and the world.

In October 2005, we featured Rosita in our “Personality of the Week” series. Dancing, on the whole, did great things for her soul, she told us: “It makes me a stronger person in and out, and it builds up your self-esteem. It builds up everything about a dancer. It contributes to our growth. It keeps you fit physically and mentally,” she said.

Baltazar also became one of the founders of the Garifuna Heritage Foundation of St. Vincent. Her role as choreographer was to teach Garinagu in St. Vincent language and cultural dances: the punta, hungu hungu, gunjei, paranda, as a part of a cultural retrieval project.

Rosita, who had served for years as an itinerant teacher in various parts of Belize, had a vision for the establishment of a national school of dance, where dancers can receive more structured training and education.