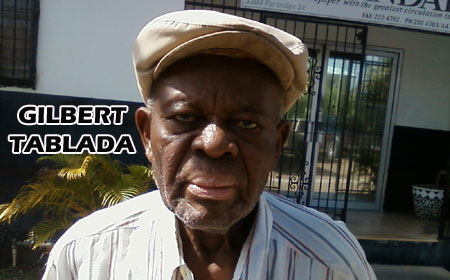 He reportedly passed away as the flag was being raised at Memorial Park at about 12:05 a.m. Independence Day, Sunday.

On Saturday, Sgt. Tablada was taken to the Karl Heusner Memorial Hospital (KHMH) for respiratory problems and chest pains. He was admitted and treated in the Emergency Ward at the KHMH, and then was sent home after his condition seemed to improve, but later died during the night.

His son, Kent, reported that Saturday was a normal day for his father, but he was suffering with asthma, and he went to the hospital to be checked out, which he normally does, and then he returned home.  Kent said that he was more than shocked when he was informed that his father had died. He was attending the Flag Raising Ceremony at the Memorial Park when he was given the sad news.

Sgt. Tablada had a career as a serious, no-nonsense, authoritative policeman who did not hesitate to take action against offenders. He was respected by not only law-abiding people, but also by criminals.

In the 80s, he was the point man who controlled the city, along with his team of “strikers.” Criminals would shrink into the background when he was in an area. Due to his zero-tolerance approach to crime- fighting, the crime rate was low during his time as an officer.

Those riding bicycles contrary to the flow of traffic were given a stern lecture and the air out of their bicycle wheels was released, forcing them to walk, sometimes for great distances; those found gambling would have their cards or dice confiscated and were scolded; those found with drugs would have their drugs confiscated and were taken in. Sgt. Tablada was “nothing to play with.”

Also, in maintaining law and order, he would embark on operations like Operation Thunder, aimed at cleaning up drug bases, capturing drug dealers, and addressing truancy and other infractions.

He had operated with a team of strikers, including Crispin Jeffries, who later became the Commissioner of Police.

In the 80s, there were no BDF/police patrols in the streets of the city, nor was there a Gang Suppression Unit (GSU); it was only Tablada and his team who stood between ordinary, innocent civilians and the criminals who wanted to run wild in the city.

Sgt. Gilbert Tablada was a fearless officer who earned the respect of everyone

Although he was about 6 feet 3 inches tall and weighed about 240 pounds, Sgt. Tablada was soft-spoken, but his voice was stern, which discouraged people from disobeying him. After taking a talking-to from him, you would try your best not to let him chastise you again.

In remembering Sgt. Tablada, his nephew, the Hon. Edmond Castro, said that Tablada can be considered one of the best police officers in Belize during his time on the job. He kept everybody in check; he also did many things that made life better for people today, and set the standard for the Police Department so that Belizeans could see how a good policeman should act and behave.

Besides being a strict policeman, Sgt. Tablada was a skilled mechanic, and a professional driver.

On many occasions he repaired his patrol vehicle at the Queen Street Police Station Garage. The patrol vehicle was his responsibility, and he made sure that it was always in good order.

On his many visits to the United States, he acquired mechanical tools, which he brought to Belize to repair vehicles. He owned a large assortment of tools, which he wanted to use to help young men to develop themselves through the vehicle repair trade.

Sgt. Tablada was passionate about the improvement of youth, and was willing to help them to change their lives for the better, and had made donations of tools to the Tubal Trade School. He made sure that he did not give tools to an individual, which would only benefit one person, but to the school, so that many would benefit.

He was a friend of Amandala and was a frequent visitor to KREM Radio, where he talked with authority on various subjects.

Also, as a professional driver, he taught many people to drive, through his driving school.

Sgt. Tablada served the Police Department for about 24 years before his retirement. He is survived by his wife and 4 children, as well as several grandchildren, many relatives and numerous friends. He is also survived by the wider communities of the city, which he impacted through his professionalism.

Funeral arrangements are being made for his burial in Maskall Village, although the date of his burial is yet to be announced.

It is expected that he will be buried with full honors by the Police Department.