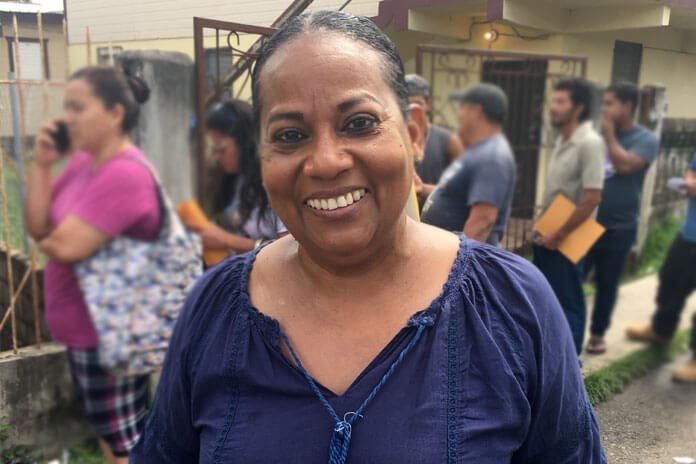 BELIZE CITY, Thurs. Jan. 9, 2020– The inclement weather this morning was no deterrent for scores of Belize City immigrants. They began gathering outside the political office of United Democratic Party (UDP) Lake Independence standard bearer, Dianne Finnegan, on Partridge Street. Some of the immigrants were seen clutching manila envelopes; others were seen diving inside the nearby Ferguson Photo Studio, only to emerge and join the line which soon swelled from the sidewalk to the upstairs verandah of the house where Finnegan’s office is located.

This morning, just in case anyone missed it, this was the opening curtain for Belize’s 2020 political season.

Why does it feel like we have been down this road before? In 2012, there was a mad rush all over the country for the governing UDP politicians who opened their offices to facilitate the granting of nationality papers to immigrants so that they could vote in the general election, hopefully for the UDP.

In Cayo, Elvin Penner even boasted that he paid out of his pocket to get nationality papers for immigrants, notwithstanding the blatant violation of the Representation of the People’s Act and its strict rules against gift-giving of above a certain amount for electoral purposes.
Penner even used his government –issued SUV like an office, storing papers that he collected from immigrants in it, and processing the papers in the back of his vehicle, as if it were an office and he was an Immigration Officer.

Apart from that, other UDP politicians and general election candidates manipulated Immigration Department offices, keeping them open at all kinds of odd hours, to facilitate the processing of immigrants’ documents, who they hoped would vote for them.

During this period, thousands of immigrants obtained nationality papers and eventually got onto the voters list all across the country.

As the morning wore on and the midday hour was approaching, television crews and media workers sought out Finnegan for an explanation of what was happening at her office with the crowd of immigrants she purportedly was helping out of her “humanitarian instincts.”

Finnegan, wife of Minister Michael Finnegan, told Krem News and Amandala that she started the process yesterday, “of helping them and on Monday, the Minister (of Immigration) will be here.” She did not specify if the “minister” was the Minister of State in the Immigration Ministry, Beverly Williams, or the substantive Minister of Immigration, Godwin Hulse.

“People need help! And wouldn’t this be the best way for the Immigration Department to see the importance of getting their job done,” Finnegan told us.

“No, they deserve this and a lot of this could have been dealt with, if people were doing their jobs,” Finnegan continued.

“I could register an individual, but that does not mean that that individual is going to vote for me. I don’t like when unno turn this into politics,” Miss Finnegan said, apparently forgetting what her party’s Elvin Penner did in the general elections of 2012.

Finnegan insisted that all that she and the staffers at her office were doing is, “get the documents from the people, staple them and let the people go home, and (we) give them (the documents) to the minister.”

So, in a sense, you are acting like a kind of clearing house for the Immigration Department, Amandala asked?

“No, I can’t act as no clearing house, because I don’t know if the papers they brought are acceptable to the Immigration Department,” Miss Finnegan said defensively.

And why should Finnegan, a politician, have to give “the minister” the immigrants’ papers when that is properly the function of the Immigration Department?

How you got involved with taking these people’s document to give to the minister, Amandala pressed Finnegan.

You are a candidate for the governing UDP in the upcoming general election, and you know that the Immigration Department has staff who does this kind of thing, but you say you are going to take these people’s documents directly to the minister, we prodded her.

Finnegan said that she started her campaign and had met with 50 immigrants in the Gungulung area of Lake Independence. It was, however, much more than 50 immigrants who turned up this morning at her office for the Immigration Department’s assistance that she indicated she could assist them with, along with her direct line to “the minister,” to whom, she said, she would deliver the documents.

The fact that Finnegan admitted to starting her political campaign and had openly reached out to assist undocumented immigrants is not lost to common sense. Finnegan is hoping to benefit politically from the effort to assist immigrants.

So now, it remains to be seen if Hon. Hulse’s purported immigration reforms will countenance Finnegan’s meddling in the department’s affairs, in supposedly providing documentation assistance to immigrants in view of the upcoming general elections.