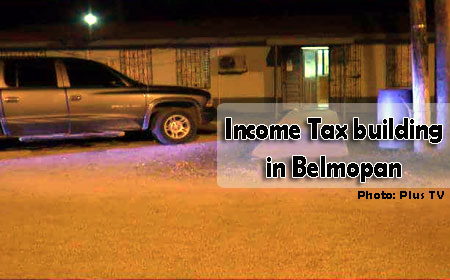 BELMOPAN, Fri. July 15, 2016–The Income Tax Department Office on Trinity Boulevard in Belmopan was held up by three impostor policemen at about 4:30 this afternoon. The office, which is a one-flat bungalow-type concrete building, is unattached to buildings in the row on Trinity Boulevard.

The robbers stole about $30,000 along with the personal belongings of the office clerks, and the cap and gun of the policeman who was on duty in the office.

Police told Amandala that the clerks were balancing their books before closing when two men wearing police-type camouflage clothing on which the word “POLICE” was imprinted, and also wearing caps that matched the camouflage clothing, approached the office. The police officer on duty at the office, believing that they were police officers making checks, opened the door so that they could enter.

When the men entered the office, however, they quickly overpowered the officer and one of them beat him in the head with a gun he was carrying.

The assailants quickly duct-taped the officer’s hands behind his back and then duct-taped his legs. They then made him lie on the floor.

The bandits then pointed their guns at the clerks, and an accomplice of the bandits, who was dressed in civilian clothes, rushed in and went into the cashier’s area and took all the money that was in the cashier’s box, and then stole some items from her, including her cellphone.

The other clerks were also robbed of their cellphones and some other items.

The driver of another vehicle went to the Income Tax office, and knocked on the door. The robbers then ran out of the back door of the office, jumped into a 4Runner and sped away.

The policeman was freed and taken to the Western Regional Hospital, where he was treated and released.

Police have begun an intense search for the fake cops.

This is not the first time that thieves dressed as policemen gained entry to a business. In February, two thieves posing as policemen went to a cable company in the city and robbed the security guard of his firearm under the pretense that they came to the office to conduct an inspection on the firearm that had been issued to him. The two fake cops then locked up the guard in the office and escaped with the gun.

In November 2015, three fake policemen went into the home of a school warden and her family. One of them showed her a pistol and threatened her son. The three imposters then rode away on bicycles.

Another incident occurred on Antelope Street Extension area around 8:00 p.m. that Friday.

A school warden told police that she was at home when her common-law husband told her that some policemen were at the door. She got up and opened the front door and saw three men by the gate, dressed casually. One of the men asked for her son.

The fake policemen said that they wanted to come in to conduct searches, then they kicked in her gate and pushed open the door, and walked into her house. One of them threatened her and told her that he was armed and raised his shirt, and showed her a pistol he was carrying under the waist of his pants.

He then told her to warn her son not to disrespect his brother, because he would return.

In April 2015, a Belize City engineer escaped with his life after he was held up at gunpoint and shot in his leg by two bandits who posed as policemen, and who stole his vehicle.

The victim told police that he was travelling on the Western Highway from Spanish Lookout Road to Blackman Eddy in his Toyota Hilux 2009 pickup, and when he reached an area near Iguana Creek Bridge, he came upon a roadblock being manned by two men dressed in police clothes, who waved him to stop.

They approached and identified themselves as policemen. They ordered him to get out of the vehicle, and one of the men pulled out a gun and pointed it at him.

The victim struggled with them, trying to get the gun from the bandit, but was shot in his leg. He still managed to escape and ran into the bushes. The bandits did not chase him, but instead, drove away in his pickup.

Police believe that the motive was robbery.

The victim was treated and released from the hospital, and his vehicle was recovered in the Mountain Pine Ridge area, Cayo District, the following day on May 1, by San Ignacio police.

The victim said that the impostor policemen were well-dressed and the gun one of them was carrying was a 9mm Glock pistol. They have not been found as yet.