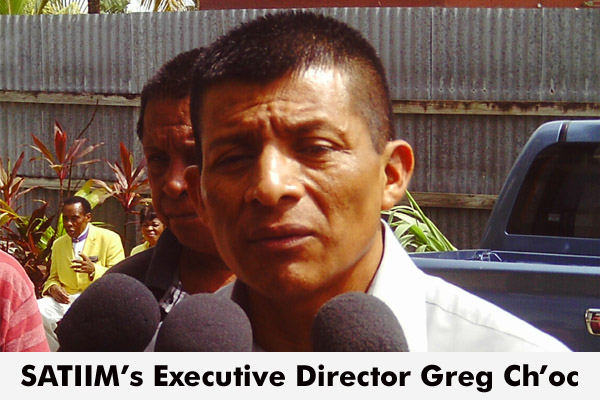 Ch’oc wants the Sept. 19 hearing moved to an earlier date

“If we do not stop them, then the rights affirmed by the Supreme Court will have been for nothing.”

The Sarstoon Temash Institute of Indigenous Management (SATIIM), along with alcaldes from communities in what is known as the “buffer zone” in Belize’s south, recently sought a court injunction against US Capital Energy, an oil company operating in the vicinity of the Sarstoon Temash National Park, the second largest national park in Belize.

The injunction that was filed is aimed at blocking US Capital Energy from conducting oil exploration activities within the park. Those activities, which have already begun, are taking place on lands which the alcaldes consider to be their ancestral and communal lands, hence the reason for the injunction.

Furthermore, SATIIM’s Executive Director Greg Ch’oc claims that the company has increased its activities within the park, which has caused them to seek an urgent hearing on the matter.

Today, he spoke with the media after appearing on the KREM WUB morning show to provide the date for the hearing and to explain the urgency of the case, among other things. He said that they had received a notice from their attorney notifying them that the date is set for September 19. He mentioned that they felt the need to try to bring the date closer “because the company has intensified its operation and they’re having like twenty-five dump trucks out there trying to prepare the site and we feel that if we do not stop them, that the rights affirmed by the Supreme Court will have been for nothing; so it is urgent that we get a hearing by the court to see whether an injunction is required, and we feel it is.”

Ch’oc explained that this is a new application that was filed about two weeks ago, separate from the one that was recently withdrawn. He said that it is an injunction which also challenges GOB’s decision of granting the company permission to do oil exploration in the park.

According to a UN Report to the Human Rights Council on a study on extractive industries and indigenous peoples, “indigenous peoples have the right to determine priorities and strategies for the development or use of their lands and territories as part of their right to self-determination.

“But even where the State claims ownership of subsurface or other resources under domestic law, indigenous peoples have the right to pursue their own initiatives for extraction and development of natural resources within their territories, at least under the terms generally permitted by the State for others.”

The report also states that “The rights to freedom of expression and to participation are firmly established in international human rights law. By virtue of these rights, indigenous individuals and peoples have the right to oppose and actively express opposition to extractive projects, both in the context of State decision-making about the projects and otherwise, including by organizing and engaging in peaceful acts of protest. States are bound to respect and protect rights of freedom of expression and participation, and may impose limitations on the exercise of those rights only within narrow bounds and for reasons of public order.”

With regards to the court’s decision to remove SATIIM as co-managers of the national park, Greg Ch’oc maintains that “from the reading of the judgment of the Court of Appeal, it has affirmed the position [that] I have taken at the Lands press conference that [that] land is Maya customary land, so in our view, we still have a right and a duty to protect and safeguard the resources on those lands.”

Therefore, Ch’oc said, SATIIM’s rangers are still going to be providing on-site management, which is a part of their mandate under the agreement they have with the government which includes patrols to deter illegal activities, which he believes have been effective in combating illegal activities compared to what has happened in the Chiquibul.

Ch’oc said that he will invite the media to tour the locations in the Sarstoon Temash National Park, where he alleges that half a mile of road has been constructed within the park and two acres of what they call” the platform” have been fully packed, so that trucks can drive up on it. He explained that the area is a wetland, and according to the rangers, it sinks now and then because of the material they put on those areas, and also due to heavy rains lately; therefore, they’re planning to take the media out there when the area is settled to “have a look at the activities they’re engaged in.”