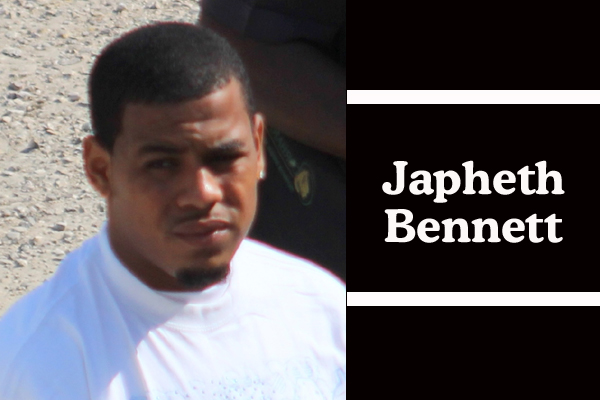 The murder occurred on September 13, 2009, at 8:30 p.m. Meighan was riding his bicycle at the corner of Banak Street and Central American Boulevard when someone came up behind him on a bicycle and shot him in the back of the head, killing him instantly.

At the time of the shooting, police believed that it was retaliation for a shooting that one of Meighan’s sons was accused of committing, which had led to the younger Meighan being arrested and charged with attempted murder the week prior to Meighan being shot.

No one was charged for the murder until October 26, 2009, when Bennett, who was a minor at the time, was arraigned for the brazen killing.

The trial started on February 19, 2013, before Justice Adolph Lucas, Sr., with Kayshia Grant representing the Crown with assistance from Shanice Lovell, and Bennett being represented by Michael Peyrefitte.

The first witness called to testify was Marlon Middleton, Meighan’s brother-in-law. His testimony was supposed to be of major importance to the Crown, because he placed Bennett at the scene of the shooting.

But when Middleton got on the stand, he suffered a moment of amnesia, because although he remembered giving the police a statement on September 15, 2009, he didn’t remember giving them all the information that it contained, especially the portion naming Bennett as the person whom he saw at the scene.

That is when Grant requested the court’s permission to treat Middleton as a hostile witness. A submission was then made by Grant to have Middleton’s statement, once it was proven that he gave one to police, entered into evidence and read to the court.

A voir dire was then held to determine if the submission would be upheld – and it was. Assistant Superintendent of Police Suzette Anderson was called to the stand, where she testified that she is the person who recorded the statement from Middleton. She was able to identify his date of birth on the statement, his address and his signature.

In that statement, Middleton reported that he was riding from the West Landivar area toward the house of his sister, Sheldon “Shelly” Meighan, Ernest Meighan, Sr.’s wife. He said he crossed Vernon Street and as he arrived in front of the now defunct business Bandag, he heard shots being fired.

The statement continued to say that when Middleton reached the corner of Banak Street and Central American Boulevard, he saw Bennett standing about two feet from a body, with something in his right hand which resembled a 9mm hand gun. He identified the body as that of his brother-in-law, Meighan.

Six other witnesses were called to the stand, including Sheldon “Shelly” Meighan; Manuel Espat; and Dr. Mario Estradabran.

The doctor testified about the findings of Meighan’s post-mortem, which determined the shooting to be a “far distance” one. He then explained to the court that such a classification refers to shootings where the shooter is “28 to 30 inches” away from their target. He continued to state that the cause of Meighan’s death was head trauma due to a gunshot wound. His findings also revealed that the wound was caused by a weapon measuring between .38mm and 9mm caliber.

After the Crown closed its case, Peyrefitte made a no-case submission, arguing that “Given the evidence at this stage, a proper direction given to the jury would mean a verdict of not guilty based on the evidence so far…If there is no evidence that the crime was committed by the defendant, the judge should stop the case immediately.”

However, Justice Lucas decided that the Crown had “good circumstantial evidence if the jury would accept the statement”, referring to the one Middleton had initially given to police, and that Bennett did have a case to answer.

The case for the defense was presented in a short dock statement from Bennett. In it, Bennett told the court, “I did not kill Ellis Meighan, Sr. I do know Ellis Meighan, Sr. I was not even close to Meighan at the time they are accusing me of…I don’t know why I would have any intention of killing Meighan or doing something like that.”

With that, the defense closed its case and it was then put into the hands of the jury. Closing arguments were made by both the Crown and the defense, and today, the Judge summed up the case.

The jury retired at 12:12 p.m. to deliberate and returned at 4:08 p.m., just four minutes shy of four hours of deliberation. When asked their verdict, they indicated that they had unanimously decided that Bennett was guilty of killing Ellis Meighan, Sr.

Bennett appeared shocked at the decision and questioned, “On what they find me guilty when the prosecutor didn’t present any evidence on me?”

But that question fell on deaf ears – it was too late to fight what had already been pronounced. Bennett will be sentenced on Thursday, February 28, 2013, allowing him time to present mitigation witnesses.