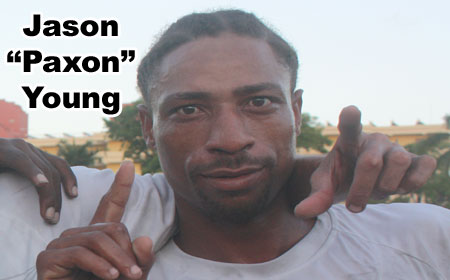 BELIZE CITY, Mon. Aug. 15, 2016–A man who believed in goals and not guns was “slaughtered” by a masked gunman as he attempted to make his way to work.

Shortly after 6 a.m. on Friday, Jason “Paxon” Young, 30, bought “Johnny cakes” on Cemetery Road and was walking on Dolphin Street, where he would be struck with two bullets in the chest and two in the left wrist while trying to shield himself from his killer.

Police told Amandala that he died on the spot.

According to Sergeant Isaiah Sanchez, the head of CIB, Precinct 1, Eastern Division South,

“Jason Steven Young, a 30-year-old Belizean, was walking on Dolphin Street from the direction of Cemetery Road, heading towards Fairweather Street, and before reaching the corner of Gibnut Street, he was approached by a man who pointed a firearm at him and fired three shots, fatally wounding him — two in the chest and two in the left wrist.”

Police revealed that the gunman then ran onto Gibnut Street, with an on-duty police officer in a private vehicle in hot pursuit.

Although the officer fired at the suspect, the gunman escaped unharmed. However, he left behind a .9mm pistol believed to have been used in Young’s killing.

Hours after the incident, police had been able to apprehend the primary suspect in Young’s murder. On Friday, ACP Chester Williams revealed, “Our investigation into the matter is still fluid and it continues. We believe that the person we have in custody is the right person, despite the fact that he had on a mask. We have other things of significant evidential value that ties him to the scene and the shooting. So, the investigation will continue from there.”

Today, Monday, ACP Chester Williams revealed that that person who was detained, Marvin Phillips, 18, has since been charged with murder and possession of an unlicensed firearm. Two years ago, Phillips had a brush with death after a lone gunman on bicycle fired at him and his friend. While his friend died, Phillips was lucky enough to survive.

Young, a father of four, was a star on the dark south side of Belize City. He was a dominant athlete who soared to prominence for his impressive skill on the football field.

According to the staff at the Conscious Youth Development Program (CYDP), Paxton had played in their Peace Cup tournament since 2008. He played for several teams, including City Boys, Kraal Road and FC Belize as a striker and midfielder, scoring several goals and earning many trophies.

He was a shepherd who guided his children and set a positive example in the poverty and crime-stricken community of Kraal Road as a person who sought goals instead of guns, and who steered his path away from prison and instead to the sport fields.

At CYDP he will be remembered for encouraging the children in his community to participate in sporting events organized by the program.