Judge rules for Allyson Major against GSU and Attorney General 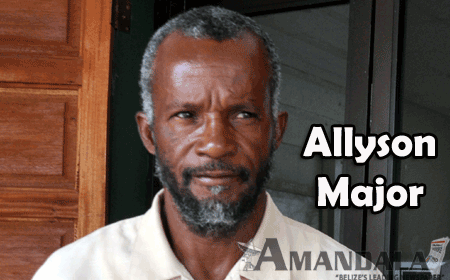 BELIZE CITY, Mon. Apr. 11, 2016–A man who was arrested, charged and imprisoned under the provison of the Amendment to the Firearms Act decided to seek redress in a constitutional claim against two Gang Suppression Unit (GSU) police officers and the Attorney General of Belize.

This morning, Madam Justice Michelle Arana ruled that his constitutional right not to be deprived of his liberty had been violated.

Allyson Major, a security guard who was charged with unlicensed firearm and ammunition possession brought the claim that his constitutional rights were violated when he was arrested, charged and held in prison for 38 days before securing bail from the Supreme Court on May 17, 2012.

Justice Arana awarded general damages of $6,000 and special damages of $6,050 to Major. The judgment also declared that the arrest and trial of Major for the offences of “kept firearm without a gun license and kept ammunition without a gun license” infringed on his constitutional right of presumption of innocence as contained in Belize Constitution. The judge also awarded cost of court to Major, although that figure has not been agreed upon as yet.

Major was subsequently cleared of the firearms charges when his case was heard in the Magistrate’s Court and the court held that a prima facie case was not established against him, on November 15, 2013.

Another person had taken responsibility for the illegal firearm and ammunition, a 16-gauge shotgun, a 410-gauge double-barrelled shotgun and two 16-gauge cartridges that police had found at 4439 Peter Seco Street, and he was sentenced to serve prison time for his guilty plea.

So why did two members of the Gang Suppression Unit (GSU), PC Franzua and PC Bowen, who are named in Major’s lawsuit, arrest and charge Major?

The police decided to charge Major under the wide net cast by the amendment to the Firearms Act that presumed that he was in possession of “any firearm and ammunition found on any premises that he is resident of”.

Section 5 (1) (e) of the Belize Constitution states, “A person may not be deprived of his personal liberty save as may be authorized by law in any of the following cases, that is to say: upon a reasonable suspicion of his having committed, or being about to commit, a criminal offense under any law.”

Major’s attorney, Anthony Sylvestre, was able to persuade the court that the amendment to the Firearms Act failed to provide authorities with a mechanism to make a genuine inquiry into the facts of a case.

“It is his argument that the legislation ties the hands of law enforcement personnel and removes from them the responsibility to make the constitutionally genuine inquiry into the facts of a case in order to verify whether reasonable suspicion exists that a crime was committed,” Justice Arana said in her 30-page judgment.

“All the officers had to be satisfied with, is whether the person fell into one of the classes of person set out in Section 6 (A) 1 of the amendment to the Firearms Act.

Justice Arana, in concluding her judgment, said: “The Constitution of Belize is the supreme law of Belize. The presumption of innocence is guaranteed by the Constitiution to each and every individual by section 6. There can be absolutely no violation of those sacred rights unless that violation is limited, proportional and reasonable. Now, was the GSU justified in arresting Mr. Major under the Firearms (Amendment) Act 2010? He certainly came within the ambit of the section by the mere fact that he was ‘ordinarily resident’ at the premises…”

Justice Arana went on to say: “I am constrained to agree with Mr. Sylvestre’s submission that the effect of the Amendment of having all persons above the age of criminal culpability living at a premises or house being detained, arrested and charged is unreasonable, arbitrary and excessive and as a consequence, unconstitutional.”

Justice Arana also noted that Major was imprisoned for 38 days because of the “crime” of being “ordinarily resident” on premises where illegal guns and ammunition were found.

“This is an injustice rendered more egregious by the fact that at the time of Mr. Major’s arrest and imprisonment, his stepson, Kent Lynch, had already pleaded guilty to the offences, thus rendering pellucidly invalid the defense’s argument that the presumption would only arise in situations where the Crown is unable to link with certainty the firearm or ammunition to any other person,” Justice Arana said.

Justice Arana also said, “I note that Parliament has abolished the provision which indicts a person for being “ordinary resident” on premises where illegal firearms and ammunition are found and I applaud them for doing so. This bill was passed into law on October 15, 2014.”

Deputy Solicitor General Nigel Hawke represented the two GSU policemen and the Attorney General in the lawsuit. The government has 21 days in which to file an appeal of Justice Arana’s decision.