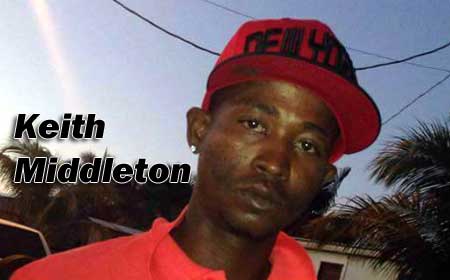 BELIZE CITY, Mon. Oct. 16, 2017–Less than one week after the murder of Justin “Etdan” Hyde, 22, another man has been gunned down in the same general vicinity of Jane Usher Boulevard.

Sometime after 7 o’clock tonight, Amandala was told, Keith Middleton, who was in his early 30s, was gunned down in his yard, which is on Mud Street in the vicinity of Jane Usher Boulevard.

Information to our newspaper is that two gunmen gained entrance from the back of his yard on Mud Street and crept in while he was socializing with other men.

Shortly thereafter, as many as eight shots were fired. We are told that the first shot hit Middleton in his leg and he attempted to climb onto the verandah of his home to escape the attack, but one of the men fired more shots, hitting him in the head and upper body.

Middleton died on the scene.

We asked sources close to his family if his death may have been retaliation for the murder of Justin Hyde, who was gunned down last Monday in the same general vicinity, but they denied that theory.

According to them, Middleton had attended Hyde’s funeral on Sunday.

Our archives reveal that this was not the first attempt on Middleton’s life, but the third. In October and November 2010, there were two attempts.

Our archives also reveal that in July of this year, Middleton was remanded to prison after he was accused of stabbing his ex-common law wife in the eye with a screw driver. He was later granted bail, but the matter is still before the courts.

Police have not yet issued an official report of Middleton’s murder. A young resident of the area told Amandala that he wishes to move from the area because, shortly, the area will turn into a war zone.