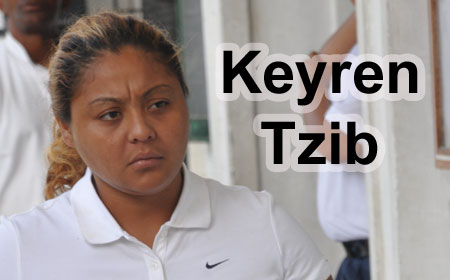 BELIZE CITY, Mon. July 20, 2015–Belize Coast Guard seaman Keyren Tzib, 26, appeared emotionless as she walked out of the Crimes Investigation Branch (CIB) double cab pickup which pulled up in front of the Magistrate’s Court Building on Treasury Lane this afternoon around 3:25 p.m. Tzib was escorted by two female police officers who handed her over to the court cell block officers.

In less than half an hour after her arrival, Tzib was standing in front of Chief Magistrate Ann Marie Smith, who read a single charge of manslaughter to her “for causing the death of Thytis James Blancaneauex on July 18, in Lords Bank, in the Belize Judicial District.”

No plea was taken from Tzib, because the charge is an indictable offence.

Chief Magistrate Smith remanded Tzib to the Belize Central Prison until her next court date on September 8.

Tzib, who was charged with the attempted murder of Coast Guard petty officer Kurt Hyde in April, had been released on Supreme Court bail, and the charges in relation to that incident are still before the Magistrate’s Court.

On Saturday, around 2:00 p.m., Ladyville police responded to a report of a stabbing incident in the Spanish Town area of Lords Bank, where they found the lifeless body of Blancaneauex, who was Tzib’s common-law husband.

In a police press release yesterday, Sunday, police said that they found the thirty-year-old Blancaneauex “lying face-up on the ground with what appears to be a stab wound to his left shoulder.”

The release added, “… prior to the fatal stabbing, there was a fight between him and his common-law wife [Tzib] who inflicted the stab wound to him.”

Neighbors in the area where Tzib and Blancaneauex were living told Amandala on Saturday that the couple had a very troubled relationship and were always fighting with each other.

Max Tejeda, who is the owner of the property where Tzib and Blancaneauex were living, told Amandala today that the couple had been living in one of the “huts” that they rented from his son for about three months.

Tejeda said that on Saturday they were all socializing. His son and another man had gone to the shop to make a purchase, leaving Tzib and one of her girlfriends, along with Blancaneauex and another man, when the fighting between the couple began.

Tejeda said that they always have had heated verbal exchanges and arguments with each other, but he never thought it would have come to this, meaning the death of Blancaneauex.
“He [Blancaneauex] was unemployed and was addicted to crack cocaine,” Tejeda said.

“He jumped up and struck the girl in the face,” Tejeda continued.

“Then he picked up a piece of bamboo stick that was lying on the ground and began flogging the girl. He told her ‘I wan kill yu r_ss,’” Tejeda recalled.

Tejeda explained, “The boy downgraded her standard by bringing her to live in here. She used to live in a big house with everything.”

Ladyville police held a press briefing this morning, at which Inspector Hilberto Romero, the officer in charge of Belize City CIB, told reporters that the police consulted with the Director of Public Prosecution and were instructed not to charge Tzib with the offense of murder.

Romero said that at the time of the incident, the persons who were socializing were consuming alcohol, and there was a domestic dispute between Tzib and Blancaneauex.

Police also confirmed that Tzib was apparently being beaten by her spouse.

Romero told the media that the indications are that Tzib and Blancaneauex had often had domestic disputes; and had been involved in several previous incidents, both verbal and physical, “but these were not reported to the police.”

Following the press briefing, Amandala asked Romero about the size of the knife used in the stabbing of Blancaneauex. He said the knife has a blade measuring about 7 inches in length.

While Tzib has been charged for the serious offense of manslaughter, she still has to face charges for the attempted murder of Kurt Hyde, use of deadly means of harm and dangerous harm, which are also indictable.

On Easter Monday, Tzib was returning on a Coast Guard vessel after a multi-agency assignment at sea, when she allegedly shot Coast Guard petty officer Kurt Hyde with an M14 Carbine assault rifle in the face. Hyde was successfully treated onboard a US Navy Hospital ship that was visiting Belize around the time he was shot.

Supreme Court Justice Herbert Lord released Tzib on a $10,000 bail with a string of conditions, the most important ones being that she was to surrender her travel documents to the court and to report to the Ladyville Police Station every Monday and Friday until her case concludes, and she should not go within 100 yards of Hyde.