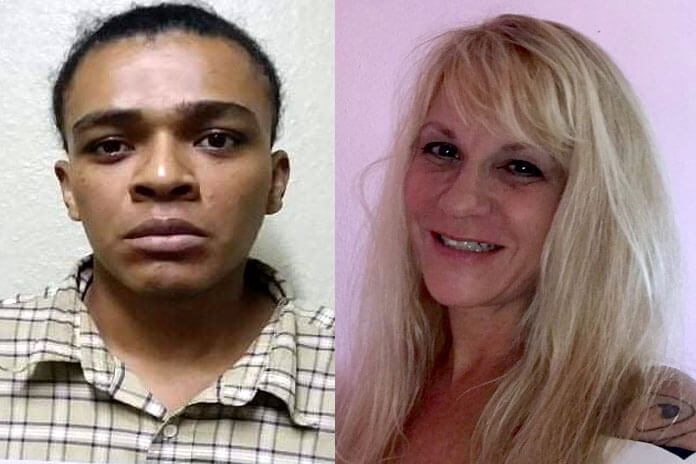 HOPKINS, Stann Creek District, Thurs. Dec. 5, 2019– At about 3:30 Saturday afternoon, police went looking for Wendi Dardano, 51, an American national who had been reported missing by her friends. On arrival at her house, they were met by her boyfriend, Leeroy Alexander Lorenzo, 28, an unemployed man from Corozal Town.

Police spoke to him briefly and took him to the Hopkins Police Station for questioning.

ACP Joseph Myvett of the Police Department said that while Lorenzo was detained at the station, police went back to Dardano’s house, where they conducted a search for her, and during the search, they opened a blue 55-gallon trash bin, and after taking out some of the trash, they made the horrific discovery of her body.

The body of Dardano, who was employed as a nurse at the Hopkins Health Center, had been stuffed in the trash bin in her yard. She had been stabbed in the chest.

Police brought Lorenzo from the station back to the yard, where they showed him the body of his girlfriend. Lorenzo was then detained and later charged with murder for the death of Dardano.

Dardano’s body was taken out of the trash bin and put in a police mobile and taken to the Southern Regional Hospital, where she was officially declared dead.

On Tuesday, police announced that Lorenzo has been charged with murder for the death of Nurse Dardano.

Yesterday, Lorenzo was arraigned at the Dangriga Magistrate’s Court before Magistrate Manan Dennison, who read the charge to him. No plea was taken, and he was remanded until February 24, 2020.

On Saturday morning, a work colleague of Dardano who was also her friend called her phone numerous times but got no reply. The friend said that after many calls her phone was answered by Lorenzo, who gave different unsatisfactory answers regarding Dardano’s whereabouts. Some of Dardano’s friends then went to police, because, they said, Dardano would never go away without taking her phone, and her vehicle was parked in the yard and she would not leave Hopkins without it.

ACP Myvett told us that police acted on the missing person report and went to her house to begin an investigation to find her, and found her boyfriend at the house.

Many believe that Dardano’s death was the conclusion of an abusive relationship. Her friend and work colleague, Shelone Martinez, told the media that on Friday morning, Dardano went to work with a swollen, bruised face. Martinez said she begged her to go to police to make a complaint, but she refused.

Martinez said Dardano told her that she did not want anyone meddling in her life.

ACP Joseph Myvett said that they had been told that Lorenzo was abusive to Dardano, but no official police report was ever made.