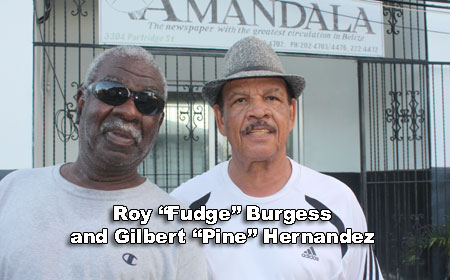 BELIZE CITY–A number of Belizeans resident in the U.S are back in the Jewel for the Independence Day celebrations, and visiting the sports desk this afternoon were two former Belize City football players who had joined the exodus north in the 1960’s and ‘70’s – Gilbert “Pine” Hernandez, M.B.E., and Roy “Fudge” Burgess, respectively.

Pine was captain of the legendary Dunlop football team, junior champions and then Belize City senior champions of the 1958-59 season. After Dunlop folded, Pine, along with some of his teammates, then joined BEC, and won a few more championships before migrating to the U.S., where he continued his playing and later coaching career in Chicago. He received the M.B.E. in 2011 for his service to sports and athletics in Belize.

Fudge said he played football on the Police Special Forces team in the mid-1970’s, and he remembers playing against yours truly and Amandala Editor Russell Vellos on Diamond A and, later, Charger. Fudge is the nephew of former Belize national high jump champion of the mid 1960’s, Roy Burgess. The high jump was a dramatic highlight of the annual September 10 track meet at the MCC.

Fudge resides in L.A., while Pine is based in Chicago, to which he returns on Tuesday of next week. Enjoy your stay, brothers; we’re always glad to have you back home for a while.