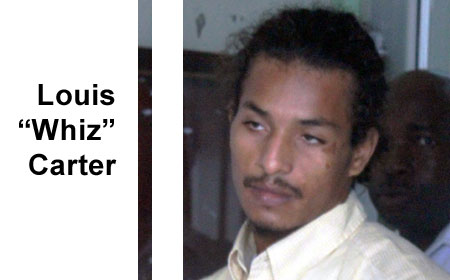 BELIZE CITY, Thurs. Aug. 11, 2016–A San Pedro man who was charged with attempted murder, use of deadly means of harm and dangerous harm in connection with a shooting incident that occurred on July 13, appeared in the Magistrate’s Court this morning, where a charge of murder was read to him.

Louis “Whiz” Carter, 33, was arraigned on the murder charge by Magistrate Carlon Mendoza. He was remanded to the Belize Central Prison until his next court appearance on October 12.

Carter was initially charged with the attempted murder of Dwayne Hyde, 30, and aggravated assault upon Hyde’s common-law wife, Kimberly Humes.

Carter was remanded to prison when he was arraigned on the attempted murder and other charges on Friday, July 15, when he appeared before Senior Magistrate Sharon Fraser.

Carter, however, with the assistance of his attorney, Anthony Sylvestre, filed a bail application at the Supreme Court, and his bail application was scheduled to be heard by Justice John “Troadio” Gonzalez on Tuesday.

At the appointed hour, however, crown counsel Rene Montero informed the court that he had spoken with the arresting officer in the case, who had informed him that the charge against Carter had been upgraded to murder, because Dwayne Hyde had died on Wednesday, July 27.

Sylvestre, however, was not so certain and was hesitant to withdraw his client’s bail application, but Justice Gonzalez told him that he did not believe the prosecutor would try to deceive the court with false information.

Sylvestre, having heard the Judge’s view of the matter, stood down the bail application.

Judge Gonzalez agreed and Carter’s bail was not heard.

On Wednesday, July 13, 2016, in San Pedro at around 12:30 a.m., Dwayne Hyde, a resident of the island, was shot in the abdomen, allegedly by one of three men who followed him to his house in the Escalante Division, DFC area.

Hyde’s common-law-wife, Humes, who was allegedly assaulted by one of the gunmen, told police that she was at home when she heard a knock at their front door and when she opened the door, she saw Hyde, who told her that his life was under threat.

Hyde, a mechanic, had allegedly been pursued by three men, one of whom entered his yard, and after a brief encounter with his attacker, a struggle ensued and Hyde was shot once in the abdomen.