Home Highlights LPG down to low of 92 bucks
Highlights

LPG down to low of 92 bucks 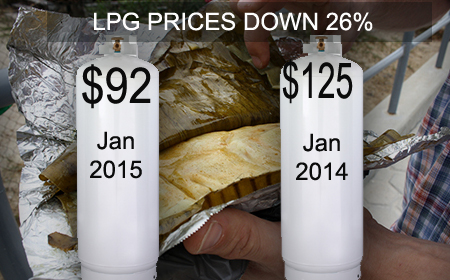 BELIZE CITY–Falling prices on the world market for fossil-based fuels have finally been trickling down to Belizean consumers with pump prices now ranging from $7.21 for a gallon of diesel to $7.88 for a gallon of premium gasoline in Belize City.

On Friday, January 16, more good news came for consumers when it was announced that effective Saturday, January 17, 2015, the price for the 100-pound cylinder of liquefied petroleum gas (LPG), the most common cooking fuel, which is also called “butane”, would fall by $6.00, slashing again what had been recorded as the lowest price tag for LPG in 2014.

It means that consumers in Belize City will pay $92 for the large cylinder of LPG in the city, although consumers in Punta Gorda would pay $97, due to added distribution costs, for LPG sourced from Mexico. The price for LPG sourced from Central America, which burns a little faster than the Mexican mix, is even lower in the city, at $90 per cylinder.