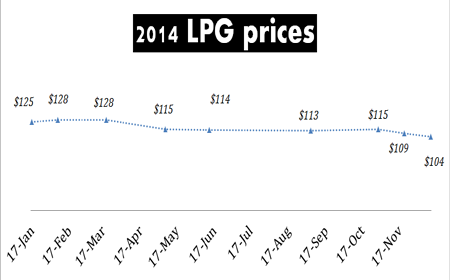 BELIZE CITY–The lowest prices for liquefied petroleum gas (LPG), the most common cooking fuel, which is also called “butane”, came into effect on Friday, December 12, 2014, when the Belize Bureau of Standards announced that the Government had decided to shave $5 off the price of a 100-pound cylinder of LPG.

This means that a cylinder of LPG imported from Mexico via Belize Gas Limited and Western Gas Company Limited, will now cost $104 for the 100-pound tank in Belize.

Imported LPG, with a lower percentage of butane and higher percentage of propane, imported by Belize Western Energy Limited, Southern Choice/Zeta Gas, or Gas Tomza Ltd. will cost $101 a tank in Belize City.

The December prices represent a decline of nearly 10%.

Of note is that prices vary slightly depending on the location where the LPG is purchased, due to transportation costs. LPG imported from Mexico would cost $114 in Punta Gorda, but $110 in Orange Walk.

Locally produced LPG supplied by Belize Natural Energy to Burrell Boom, San Ignacio, Belmopan and Benque Viejo del Carmen is $96 a tank, down $3 from the $99 price tag fixed by the Government last month.