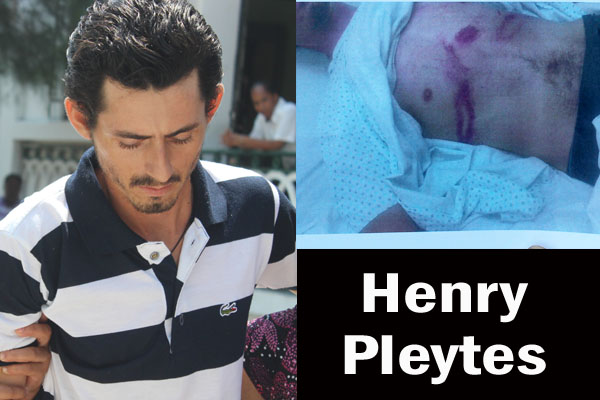 A Ladyville man who spent four days in the hospital because of an alleged beating by Ladyville police officers was arraigned on a string of charges when he appeared before Senior Magistrate Sharon Frazer this morning, Monday.

Henry Pleytes, 25, was escorted up and down the stairs at the court by his sister and another relative, because he says that he is still unable to walk on his own, without assistance.

Pleytes was slapped with three counts of aggravated assault on three police officers. The allegation against Pleytes is that on Sunday, March 30, he assaulted PC #411 Mathias Cholom, Corporal #347 Luis Quixaj, and PC #964 Diego Pech, who are all attached to the Ladyville Police Station.

In addition, police charged him with harm upon Cholom and resisting lawful arrest from Cholom, while in the execution of his duties.

After pleading not guilty to all of the charges, Frazer released Pleytes on bail and adjourned his matter to June 11.

Pleytes, according to an independent medical legal form that was prepared at the request of his family, is suffering from a fractured rib, the media was told outside the court.

Apart from a fractured rib, the family said that Pleytes was suffering from abrasions to his chest and leg.

Following his arraignment, Pleytes told court reporters that at no time did he beat or try to beat his common-law wife, Jessica. He is insisting that it was she who attacked him first. But he walked away from the situation and took his three children with him, he said.

He claimed that Hernandez had taken two of the children to a bar and that he had gone to get the children from her.

Before he could reach very far, however, police cornered him and began to beat him, he said.

The father of three says he has filed a complaint with the office of the Ombudsman.