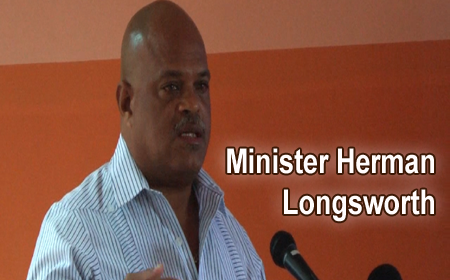 BELIZE CITY–Earlier this year, this newspaper chronicled the setbacks that have befallen successive governments as they have attempted to complete a comprehensive facelift of the Marion Jones Sports Complex, one of the country’s most prominent sporting facilities, and today, five years after the last groundbreaking ceremony for the facility was held, current Minister of State in the Ministry of Education, Youth and Sports, Hon. Herman Longsworth, announced that the protracted refurbishments on the stadium should be completed by the end of this month.

If works go as planned, the completion of the facility will be welcomed news for both athletes and sports enthusiasts, especially in the population center, Belize City, and when the media caught up with Longsworth at an unrelated event today, he indicated that the long awaited conclusion of the upgrades on what had become a project that was plagued by holdups, is right around the corner.

He said, “Marion Jones [Sports Complex] is almost ready to be opened. We were hoping for the end of November to have it completed sufficiently [so] that we can actually open it to the public. I believe we will meet that deadline by, give or take, a few days.”

Longsworth mentioned that a decision was made, based upon his insistence, that a VIP section in the seating area and offices for the National Sports Council would not be included in the works, and that instead, all the resources would be invested in the areas to be utilized by athletes and members of the public.

“We will have all the athletes’ areas and public areas complete when we launch. We will not have the VIP areas; VIP areas can come later, as far as I’m concerned. What matters to me is that the public has use of that facility, and that the athletes have use of the facility”, he emphasized.

Ground was broken for the $13 million project in August of 2009, and at the time it was promised that the project would be completed in 18 months, but soon those months turned into years, and now, almost four years since the proposed finish date, there is finally a ray of hope in relation to the long anticipated opening of the essential sporting complex.

Another popular Belize City sporting venue, albeit strictly for football fans, which is in the midst of an extended rehabilitation phase is the MCC Grounds which, for many decades, has been the primary football venue in the Old Capital.

Those works, which began in June of this year, were prompted – in part – by damages resulting from non-sporting events that were held at the venue, and were supposed to have been completed by the beginning of August 2014, in time for the start of the Premier League of Belize (PLB) Belikin Cup Opening Season semi-pro football tournament; however, that date was later deferred to December 2014, reportedly due to hitches involving the surface of the football pitch.

Minister Longsworth, who said that he had visited the MCC Grounds yesterday, Thursday, today informed the media that the upgrade is coming along quite well, and that it is just taking longer than expected because of the challenges encountered in ensuring a complete grass covering of the field.

“The grass is coming along quite well, we still have patches that have not come the way we want them to come, but the grounds team is out there working diligently every single day to try to promote the growth of the grass there. We are in the process now of finishing up the foundations for the light posts that are going to be erected. Just yesterday evening, I saw the design for the electrical [works], and so we have that ready [and] because all the electrical [works] will go underground, we should be proceeding with those by next week, or as soon as the foundations are properly cured – the concrete piles and pile caps – as soon as those are properly cured, we will erect the columns, which have already been built in Spanish Lookout and awaiting erection. It is simply the groundwork that is kinda keeping us back”, Longsworth asserted.

He noted that although their initial intentions were to open the MCC Grounds by early December, they have pushed back that deadline to late December for good measure.

In the meanwhile, FC Belize, the solitary Belize City semi-pro football franchise, has had to play its home games in Orange Walk Town, which has certainly taken a toll on the beleaguered team which, we understand, has been hemorrhaging financially and unable to secure proper sponsorship following the death of former owner, Lionel Welch, earlier this year.

BELIZE CITY, Thurs. Oct. 1, 2020-- As we are about to go to press tonight, a bombshell 5-page release from the Football Federation of...
Read more
- Advertisment -