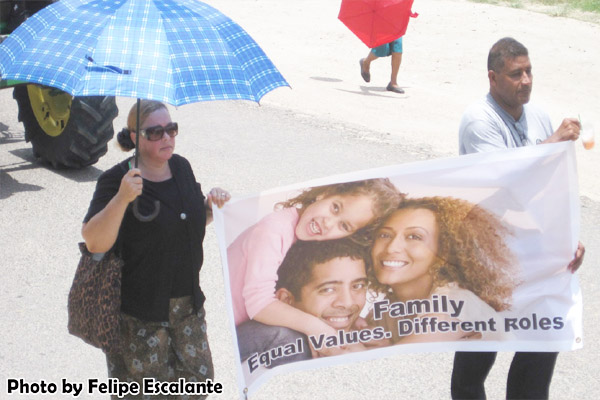 March on Dangriga planned for the weekend

Belize Can founder Patrick Menzies, one of several Belizeans who have stepped to the frontline in opposition to Belize’s Revised Gender Policy 2013, told us that more than 2,000 Belizeans who paid their own expenses attended Cayo’s Constitutional March as a sign of public support for Belize’s Constitution, but also as a signal that they do not support the recently approved policy.

Menzies said that those Cayo protestors, as well as the over 4,000 who were estimated to have participated in last Friday’s march in Toledo, were “not a rent-a-crowd,” but people who paid their way to go out on a work day to participate.

The people, he said, came out to send a message that they will stand for the Belize Constitution, which acknowledges the supremacy of The Creator.

Notably, though, an official of the Council of Churches, one of two prominent Christian alliances (the other being the Evangelical Association of Belize) has indicated to the media that it has not yet taken a formal position; although they are concerned that the policy might pave the way for the legalization of homosexuality in Belize.

Organizers have said that they are sending a loud and clear message to Government that the Gender Policy 2013 should not be allowed to be hijacked by the agenda to mainstream LGBT rights into public policy.

Menzies points to the preamble of the Belize Constitution, which, he said, trumpets the supremacy of the Creator, and, he stated, Belizeans should be knowledgeable of what the “beautiful document” contains.

Belize Can is observing July as Constitution Awareness Month. Menzies highlighted the preamble of the Constitution, which starts out by saying that “the Nation of Belize shall be founded upon principles which acknowledge the supremacy of [the Creator.]”

Pastor Scott Stirm, another lead organizer of the event, also noted another section of the preamble which says that, “…there can only be true freedom in the embracing of moral and spiritual values.”

Stirm said that their agenda is to guard family values and public morality, which are both enshrined in the Belize Constitution.

Tuesday’s demonstration was the third in a week, and the next march is to be held in Dangriga this weekend. Next Tuesday, July 16, the protest goes to Belize City.

The inaugural march was held in Orange Walk last Tuesday. We understand that there are discussions over whether a separate march should be held in Corozal.

The grand finale is expected to be a march on Belmopan at a date and time to be announced.