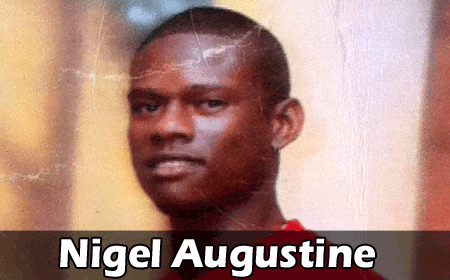 BELIZE CITY—Leptospirosis, a potentially deadly disease contracted when food or water is contaminated by rat urine or feces, left the family of Nigel Augustine, 22, with a massive financial burden of $13,000, and although they have received donations to help pay the bill, Mary Lobo, Augustine’s mother, told us on Friday that they still need to find $9,000 more to settle their account with the Karl Heusner Memorial Hospital (KHMH).

Augustine’s medical records state that he suffered leptospirosis, acute renal failure and pneumonia. His mother said that he has been unable to return to work, and his kidneys won’t function well for about 6 months.

Augustine, who worked part-time in the construction field, had to be on life support for 21 days in the intensive care unit of the KHMH, at a cost of $500 a day – more than the average person earns a week.

He spent another week and a half in the medical ward before he was released after what his mother described as a “miracle recovery.”

She has nothing but high praises for Augustine’s primary doctor, Dr. Pedro Arriaga, as well as Dr. Daniel Godinez, who she said took care of her son while he was hospitalized.

We met Lobo at A&R Store on Friday, where she was soliciting to help pay off the astronomical bill, which her family can by no means afford.

We tried to contact the Chief Executive Officer in the Ministry of Health, Dr. Peter Allen, who, we were told, would be the person in the Ministry who could help determine whether the family, who have petitioned him, could benefit from social assistance through the ministry, but when we called him we received no reply.

Lobo told us that her son, her eldest child, got sick after he ate fried chicken from a Chinese shop on Central American Boulevard.

“He started on Saturday with pain and fever and on Sunday, he started to vomit blood and had to be rushed to the Karl Heusner Memorial Hospital,” the mother said.

“I could say he had died already, because the doctor had come out to tell me, but they ‘shocked’ him back and he came back and from that day, he went into the intensive care unit and he was on life support machine for 21 full days,” Lobo said.

“He opened his eyes and began talking… He spent about a week and a half in a medical ward. He came out around mid-July. I am grateful that he is back on his feet, but only the bill I have to worry about,” the mother went on to say.

Anyone wishing to assist can contact the family at 632-2135 or make a deposit at Lobo’s Heritage Bank account #35641.

In January, Michael Winston Lewis, 47, succumbed to leptospirosis after eating food that had been contaminated by rat excrement. His death put health professionals on high alert, and they undertook a clean-up and rodenticide campaign in his neighborhood on Castle Street.

Lobo said that in the beginning, she felt despondent and frustrated, but gave everything into The Almighty’s hands, and He came through for her.

“My son went to death row and he is back,” she said.

(Of note is that the basic rate for a night in the ICU at a private hospital can be around $7,000.)