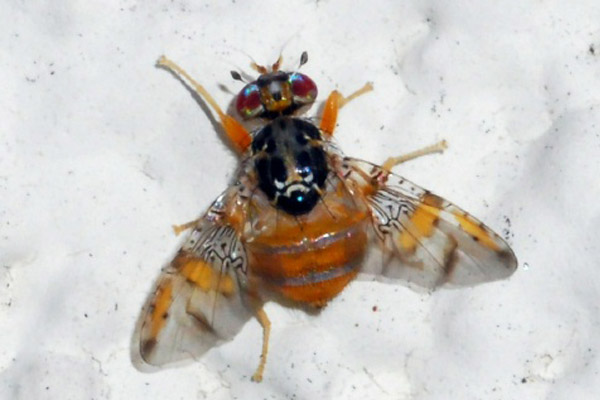 Southern Belize—and specifically the area from Silk Grass to the Sarstoon—is this year reporting an infestation of Mediterranean fruit flies (medfly for short), and the Belize Agricultural Health Authority (BAHA) has announced a quarantine of part of the Stann Creek District and the entire Toledo District – where, historically, the medfly infestations have occurred, presumably due to the smuggling of fruits and vegetables.

The quarantine, which came into effect on Saturday July 13, 2013, will run for at least 6 weeks and possibly up to 12 weeks, depending on the results of our surveillance program, Hernan Zetina, who is the Coordinator of the Medfly Programme in Belize, told Amandala.

Zetina said that, “We’ve been having a series of detections since the last week of April.”

What the quarantine means is that the fruits and vegetables on a list of prohibited items are not allowed to be transported. If they are found upon searches conducted at designated checkpoints, BAHA officials will confiscate them. A 24-hour quarantine checkpoint has been placed on the Southern Highway at the village of Silk Grass, BAHA has notified.

Examples of fruits and vegetables allowed to be moved from the quarantine area are watermelon, pineapple, coconut, bananas, plantains and hot peppers. Zetina said that he heard someone ask on radio whether hot peppers are allowed, and he told us that they are not on the list of prohibited items.

The idea behind the quarantine, said Zetina, is to stop the movement of produce known to host the medfly. He said that there is absolutely no threat to humans, if they consume the fruit; except that they might find maggots or worms inside.

Apart from the quarantine, BAHA has also put in place an eradication program, which entails the weekly spraying of the fruit with an insecticide approved for organic production, GF120 (a production of bacterial fermentation). BAHA also fights the medfly by stripping fruits off the infested trees.

According to Zetina, there are no reports of medfly infestations in northern Belize, and one of the main reasons for the quarantine is to protect papaya crops in the north, which earned Belize US$10 million in earnings last year.

Most of those crops are destined for the US market, which maintains a strict policy on importing produce from medfly-infested areas. According to Zetina, the requirement, due to the US policy, is that medfly fields be put under 9 square miles of quarantine until they are declared medfly-free. Belize’s papaya farms only make up 500 acres, and so a medfly infestation would shut down the papaya industry in the north. The US, he said, would not take the papaya if there is a fruit fly infestation in the north, and Belize would have to close the market for 90 days, until it is able to declare the area free of the medfly. Zetina said that this threat must be averted.

However, there must also be immediate measures to contain the infestation in southern Belize, because, according to Zetina, as much as 15% of the citrus crop could be lost due to the medfly.

BAHA reports that Mediterranean fruit flies have been detected at various points in the Toledo District, as well as at Mango Creek and Placencia in the Stann Creek District – which are the hotspots for the infestation.

The medfly infestation, Zetina said, was very likely caused by the illegal importation of produce such as apples, and pears and peaches, through neighboring Central American countries. He noted that the bulk of the infestation was seen in Mango Creek, which has been getting imports mainly from Honduras.

Additionally, southern Guatemala could also be a source of infested fruit, according to the official. Of note is that illegal produce is also brought into Belize at Jalacte, and Zetina told us that BAHA has been working with the Ministry of Agriculture, the Ministry of Natural Resources and Customs, to select an area for formal infrastructure to facilitate these agencies. BAHA is also planning on boosting checkpoints in southern Belize, particularly as concerns over illegal importation of produce have increased due to increased access to Placencia with the improvements on the highway to Jalacte, which Zetina said is half-complete.

The announcement from BAHA today called on the public to desist from the illegal importation of fresh fruits and vegetables from infested areas, such as Guatemala and Honduras. It added that violations will lead to immediate confiscation and destruction of produce regardless of quantity.

According to BAHA, the medfly, the scientific name for which is Ceratitis capitata, “is an exotic pest and has never been established in Belize. A testament to this was when Belize was officially recognized by the USDA as a medfly-free country on August 28, 2001.”