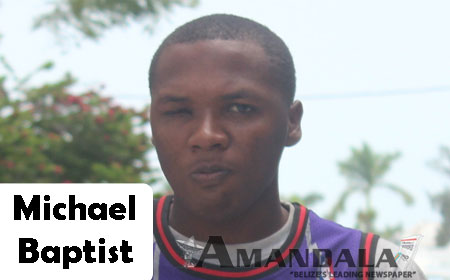 BELIZE CITY, Thurs. July 14, 2016–A 20-year-old man, Michael Marvin Baptist, was remanded to the Belize Central Prison this morning after he was arraigned on attempted murder and related charges for a stabbing incident that occurred last Wednesday, July 6, at a home in Los Lagos. The stabbing victim, Eugene “Fatback” Webster, who is the stepfather of the accused man, was in a coma at the Karl Heusner Memorial Hospital (KHMH) earlier this week.

Webster’s wife, Caret Webster, told Amandala tonight, however, that he came out of the coma yesterday evening and has been showing signs of improving. Mrs. Webster said that she wants to thank all the people who are praying for her husband’s recovery.

The accused did not have to make any pleas after Senior Magistrate Sharon Fraser read charges of attempted murder, use of deadly means of harm and dangerous harm to him.

Fraser remanded Baptist to prison until his next court date on September 2.

In a media interview about the incident, Assistant Commissioner of Police, Edward Broaster, the Regional Commander of Belize Rural Eastern Division, said that when police went to Webster’s home in Los Lagos, they found him lying on the floor. He was bleeding profusely from what appeared to be several stab wounds to the back, arm and neck areas.

Webster was rushed to the KHMH, where he was admitted in a critical condition.

In court, Baptist could not provide the court with a fixed address; however, on the court papers his address was listed as 65 Racecourse Street.

He told Magistrate Fraser that 65 Racecourse Street is the address of his father and that he has no true address and that he lives all over the place.