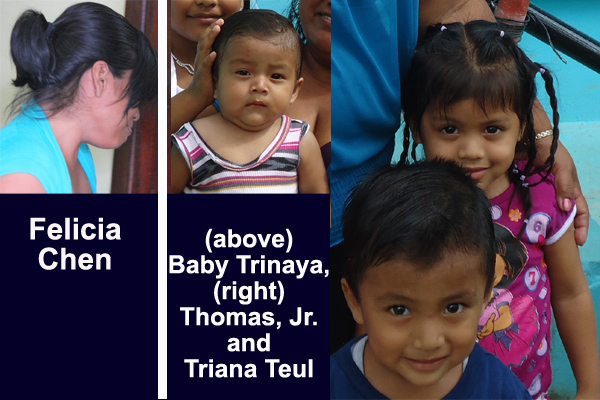 According to the surviving child, her mother, after killing 3 of her children, tried to kill herself

In one of the most horrific, tragic and heartbreaking incidents to happen in this nation, a mother is accused by police of killing three of her four children on Saturday, April 27, by drowning them at Belizean Beach, a popular bathing and picnicking spot four miles out of Belize City, on the George Price Highway.

The mother reportedly then tried to kill herself.

A police press release of Monday, April 29, 2013 stated: “On April 27, 2013, at about 12:15 p.m., police visited Belizean Beach, at Mile 5 on the George Price Highway, where they saw the apparently lifeless bodies of three children that were retrieved from the sea by police officers.

“Initial investigations revealed that on the same date between the hours of 8 and 9 a.m., Felicia Chen, 22, an unemployed of Mile 8 on the George Price Highway, left with her children — Trina Teul, 6, Triana Elica Teul, 4, Thomas Edilberto Teul, 3, and Trinaya Felicia Teul, 1 — for Belizean Beach.

“On arrival, she reportedly took all her four children and walked with them into the sea until three were drowned.

“However, Trina Teul, the eldest, reportedly ran out of the sea and alerted someone on the highway about the incident.

“The police were then informed. All three bodies (identified by their grandmother of the same address, Prostacia Chen) were taken to the KHMH, where they were pronounced dead at 1:45 p.m. The bodies now await a post-mortem. Chen is being detained pending the outcome of the investigation.”

his afternoon, in the Belize City Magistrate’s Court, Felicia Chen was charged with three counts of murder in proceedings that were held en camera before Magistrate Dale Cayetano, and presented by the Director of Public Prosecution, Cheryl Lynn Vidal.

Chen was flanked by two CIB personnel, who did a good job of obscuring her from the media. No pleas were taken from her because the offenses are indictable and will be heard in the Supreme Court. Chen was unrepresented at the arraignment as well.

An assessment of Chen’s mental state has been requested for tomorrow and that report will be forwarded to the magistrate in order for him to make a determination as to whether she will be housed at the Hattieville Prison until her trial for the triple maternal filicide, or if she has to first go to a mental health facility, because there are concerns as well as to what may have driven Chen to kill her three children — Triana Elica Teul, 4; Thomas Edilberto Teul, 3; and Trinaya Felicia Teul, 1.

Their sibling, Trina Teul, 6, is receiving counseling after witnessing the horrific scene.

At the end of the arraignment, Chen was whisked through the back and into a waiting police vehicle. An adjournment date will be set tomorrow when she returns to court to learn where she will be housed until her trial.

A resident of the Belizean Beach area told Amandala that she was at home that Saturday morning when she saw a woman and her four children walk past her house towards the seaside in the Belizean Beach area. About two hours later she heard her dogs barking and saw a little girl bending down to pick up stones to throw at the dogs. She called off the dogs and the girl walked quickly up the George Price Highway towards Hattieville.

At the same time her daughter, who saw the little girl coming from Belizean Beach alone, came to her and told her that something was wrong, that the girl was walking back alone.

They immediately called back the child, who by this time was a distance away and was walking quickly.

The child came back and it was noticed that she was wet and muddy, and she had a baby bottle with her in a small bag she was carrying.

The resident asked the child what happened, and where she was going.

The child said that she was going to Ladyville, and that the bottle was for the baby, and that her mother had killed the baby.

The resident immediately took the child to a police vehicle checkpoint that was nearby, and the child told the police that her mother was killing herself.

Police at the checkpoint sent two BDF soldiers stationed there to see what was happening, and they called for backup.

Upon the soldiers’ arrival at the seaside, they saw the woman walking out to sea. The two soldiers and the Belizean Beach resident’s son-in-law, who by this time had joined them, went in after her and brought her back to shore.

The woman (Chen) reportedly told the soldiers to shoot her with their guns, because no one could forgive her for what she had done. She had killed her babies, and she began to cry hysterically.

The mother then showed the soldiers the area her babies were, and the soldiers began to search for them. The first baby was found shortly after, then the second, then the last, by the two soldiers and the resident’s son-in-law.

The three bodies were laid on the beach and attempts were made to resuscitate them, but they were already dead. They were then taken by the police to the Karl Heusner Memorial Hospital, where they were declared dead on arrival.

The mother told the resident, who had gone to the beach after she (Felicia) was brought out of the sea, that she was tired of abuse from her children’s father, who beat her, and she had decided to kill her children and herself.
The resident said that she was filled with horror and grief, and began to cry as if the babies were hers.

It was later learned that officers of the Coast Guard had seen the mother taking her babies into the sea, but they had not discerned anything peculiar about it, assuming, perhaps, that the family had gone swimming. They were later alerted that the children had drowned, but by that time the police and the BDF were already in the sea looking for the bodies.

When questioned, Felicia’s family said that she had not exhibited any strange behavior before leaving home. She had reportedly told the children that they were going to see their father, and had gotten money to pay the bus fare from her mother, Prostacia Chen, who said that she briefly entered the kitchen after giving them a few dollars, and found that they had already gone when she came back out. Her brother, in fact, said that Felicia and the four children seemed happy and were laughing when she left home.

However, witnesses at the bus stop in the Mile 8 community said that while Felicia was there with the children waiting for the bus, she got a text message and her demeanor changed. They said that prior to receiving the message on her cell phone, she had sent her eldest daughter to a Chinese store to buy pampers for the baby.

Felicia’s brother has hypothesized that when Felicia left home, she had no intention to kill the children, and the fact that she bought pampers for the baby proves that. He believes she had indeed planned to take the children to see their father. It was the text she received from the children’s father that put her in a destabilized mental state, he believes. The problem, the brother explained, lay in the relationship between Felicia and the father of the children. He had left her, and although he was employed, he did not financially support the children.

Employees at the Chon Saan Palace on Kelly Street in Belize City, where Felicia had worked, said that she and her boyfriend – the children’s father—had both been employed at the Palace, but he had been very abusive and cruel to her. An employee said that all of the Palace staff can vouch for the abusive behavior that Chen endured, and he has strongly advised the family to get a warrant to enable BTL to track the message sent to Chen’s phone.

Felicia’s mother, Prostacia Chen, has said that since she got the devastating message on Saturday that her grandbabies had died, she is at a loss for words, and is still in a state of shock. She is hungry, but cannot eat; she is sleepy, but cannot sleep. She feels exhausted and empty, she said. She wishes they would come back, but they are gone, and she just wants to bury them properly, near her husband, who they all called “Pa,” in the Homeland Memorial Cemetery.

The deaths of her grandbabies are particularly painful because they have occurred exactly one year after the death of her husband.

Arrangements are presently being made for the children’s burial. The father of the kids wants the children to be buried on Friday, May 3, but the family would like the burial to take place on Wednesday, May 1, Labor Day. Chen’s brother – the children’s uncle — said that despite all that has happened, they will try to work with the father to ensure that the children receive a proper funeral.

On January 5, 2009, Felicia and her eldest child, now 6, were hit by a D&E bus; a wheel rolled over Felicia’s foot, and her daughter, then one year and eight months, landed beneath the bus, and was injured. Felicia was pregnant with her second child at the time.

Mother and daughter were about to cross the street in the area of the bus terminal, at the corner of Cemetery Road and West Collet Canal Street, near the Pound Yard Bridge. As a result, Felicia was unable to walk for a while due to the injury to her foot.