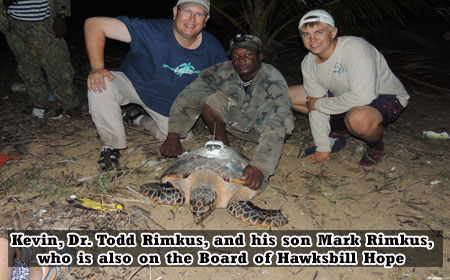 BELIZE CITY, Thurs. July 16, 2015–Manatee Bar beach in Gales Point Mantee, Belize District—a culturally vibrant, grassroots Kriol community of drum makers, fishers and farmers—is said to have the highest frequency and concentration of the endangered species, the Hawksbill Sea Turtle (Eretmochelys imbricata) nesting in the Caribbean, according to Hawksbill Hope, a nonprofit organization founded in 2009 by Dr. Todd Rimkus, a professor at Marymount University. It is connected with the Biology program at Marymount University in Virginia, USA.

The Hawksbill Sea Turtle, which can grow as long as 3 feet and up to 150 pounds, enjoys the highest protective status under the Convention on International Trade in Endangered Species of Wild Fauna and Flora (CITES), an international, inter-governmental agreement which regulates international trade of wildlife, flora and fauna to ensure their survival. This turtle is listed under Appendix I, along with other species threatened with extinction, and trade is only permitted in exceptional circumstances, such as scientific research.

Hawksbill Hope is conducting its 4th year of turtle tagging in Belize, in order to track the movements of turtles which appear in the Gales Point area, but which may migrate during their lifetime to places like neighboring Honduras.

The organization says that the initiative came after several summer study-abroad trips between 2007 and 2009 to the Gales Point Wildlife Sanctuary in Belize, Central America.

Dr. Rimkus says that Kevin Andrewin of the Gales Point Wildlife Sanctuary (GPWS) has been pivotal in fostering the relationship between Hawksbill Hope and GPWS, which receives funding from Hawksbill Hope to help in its efforts to protect sea turtle nesting on Manatee Bar Beach, located just east of the southern lagoon near Gales Point, Belize.

Features of the program are (1) nest protection, (2) beach cleanup, and (3) turtle tagging for research. In 2011, Hawksbill Hope and GPWS began satellite tagging of Hawksbill Sea Turtles. The group says that they have been successful every year in tagging at least one Hawksbill.

Andrewin told us earlier this week that they will be going out every night this week for about three hours to see if they can find turtles to tag.

According to Hawksbill Hope, the first satellite tag was deployed by Dr. Rimkus with Andrewin’s help and the assistance of Marymount students enrolled in his study abroad marine biology class. The first turtle tagged was named Hope.

The tags relay data via the NOAA low-orbiting weather satellites and ground-based receivers and data processing systems, showing where the turtle is at a given point in time.

The project also seeks to raise awareness of the Hawksbill Sea Turtle. The turtle tagged in 2012 was named Moochula, and it is featured in an 8-minute film, produced by Prof. Barry Erdeljon from Marymount University, who will be present for the screening in Placencia this weekend, at the Belizean Film Festival.

Moochula comes from a sambii song; it means “nice, fine, so good!”