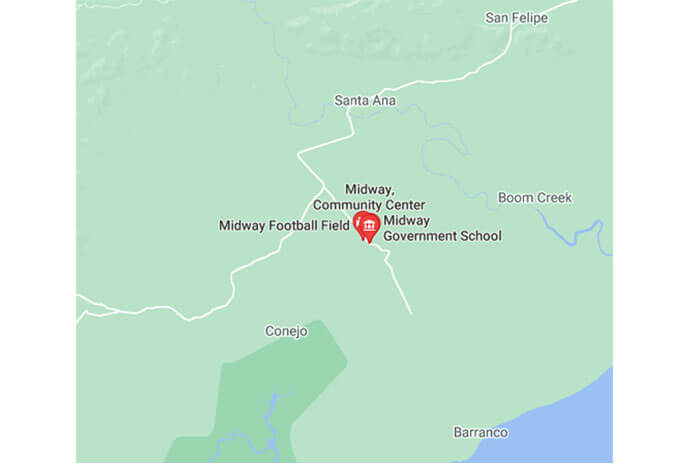 BELIZE CITY, Mon. June 28, 2021– Over the weekend, Belize recorded 52 new cases of COVID-19 — most of which can be traced to two clusters in separate regions of the country.

The first cluster that emerged over the weekend originated in the village of Midway in the Toledo District, where 25 new cases of COVID-19 were found. Approximately 30 families reside in this village, and the 25 Midway residents who are reportedly infected with the virus constitute a considerably large portion of the total population of the village — and nearly amount to one case per household.

The area representative of Toledo East, Hon. Michael Espat, believes more cases will be discovered in the village after contact tracing is done. Villagers of Midway, along with residents of a number of the other villages in the area, use the Barranco bus as their main mode of transportation to Punta Gorda Town.

The inhabitants of rural Toledo are known as the major providers of produce at the Punta Gorda market. Additionally, since many essential services are not available in the villages, the villagers often commute to the town to carry out their errands. So the number of persons who were potentially exposed to the virus, either during the villagers’ commute, or while infected villagers might have been carrying out errands in Punta Gorda, is disturbingly high.

This is the primary cause of fear for the Minister of State in the Finance Ministry, Minister Espat. The normal route for the Barranco bus is through the villages of Midway, Conejo, Santa Ana and San Felipe. Since the bus, as it headed to town, would also transport passengers from the villages, starting from Jacinto Village, the number of persons who were put at risk of contracting the virus was further compounded. Village bus services are not able to have multiple buses running throughout the day. Most likely all villagers heading towards Punta Gorda Town for the day would have been passengers on the same bus. Thus far, 3 additional cases of the virus have been confirmed in Conejo (a village along the route of the Barranco bus) and may be connected to the Midway outbreak.

Minister Espat has remarked on.the difficulty in maintaining the COVID-19 protocols in the villages. Many residents of the villages do not comply with the established protocols, and Minister Espat says there is need for an intervention. The Minister of Health and Wellness, Minister Michel Chebat, also shared his views on the potential for virus transmission in rural Toledo. He believes that communication is the key to controlling the transmission of cases in these uniquely governed areas. He later said that he intends to hold a public health fair in the area, as was done in the Santa Cruz village, and that the Health Ministry has since deployed community healthcare workers to communicate with the villagers and their leaders — sharing information about the effects of the coronavirus and encouraging the population to both adhere to public measures and get vaccinated.

Contact tracing has since led to the discovery of the index case in this cluster. It is believed that this outbreak originated with a resident of Midway Village who works in the neighboring village of Barranco.

In addition to the cluster of COVID-19 cases found in the rural part of Toledo, another COVID-19 cluster was found in the heart of the country’s urban/international operations — at the Philip Goldson International Airport (PGIA) in Ladyville, where 12 of the 17 immigration officers who work at the facility tested positive for COVID-19. This marks the first emergence of a cluster of cases at a port of entry since the reopening of the airport for international travel back in October 2020.

Since the discovery of this cluster, an additional 122 persons have been tested at the airport. Fortunately, these tests yielded no further positive results. Sanitization and quarantine processes have since been initiated at the airport, and all immigration officers who have been on active duty at the PGIA have been temporarily relieved of their duties and will remain in isolation until further notice.

“The ministry continues to facilitate, within the laws of Belize, the travel of nationals and visitors,” said a release from the Ministry of Foreign Affairs, Trade and Immigration. “It is within the ministry’s mandate to promote regular migration and contribute to the sustainable development of Belize while maintaining national security by enhancing border security,” the release further said.

These 2 clusters serve as a reminder of the considerable threat that COVID-19 continues to pose, despite a period of recession. Minister of Health and Wellness, Hon. Michel Chebat, says that the ministry does not have any immediate intentions to amend the current public health regulations. He asserted that these measures have been proven to reduce the risk of transmission.