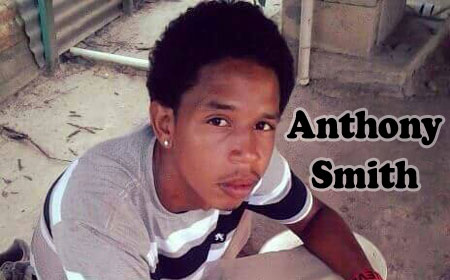 BELIZE CITY, Mon. July 13, 2015–At about 8:30 last Friday night, Anthony Ashton Smith, 18, of Coney Drive, was shot in the chest, head, abdomen, upper body and leg as he was riding his bicycle on Central American Boulevard towards Fabers Road, from Caesar Ridge Road.

When Smith arrived at the junction of Freedom Street and the Boulevard, the gunman fired several shots at him. He died almost immediately on the scene.

Police who were on foot patrol in the area were coming up from Jane Usher Boulevard toward Fabers Road when the shooting occurred and were about 200 feet away at the time of the incident, according to police.

The officers chased the shooter, who, police say, fired at them.

Police took cover and fired back, and the shooter threw the gun in a yard and escaped.

Police said that they quickly recovered the gun and saw blood in the area, which made them believe that the shooter may have been injured by one of their shots, but so far, he has not sought medical assistance for the gunshot wound.

Superintendent Hilberto Romero told the media this morning during a press brief that Anthony Ashton Smith had been receiving threats and had been having problems with persons in the area.

An investigation into the death is being conducted from all angles, but it is not yet known if the death was gang-related, said police.

Smith’s body was taken to the morgue, where it will undergo a post-mortem to certify the cause of his death.

So far the killer is still at large, and the motive for the murder is unknown.

Police reported that nineteen 9mm shells were recovered from the scene, and the 9mm pistol, which police strongly believe is the gun used to murder Smith, was recovered.

Family members of Smith, who was his mother’s only son, were too grief-stricken and declined interviews with the media.