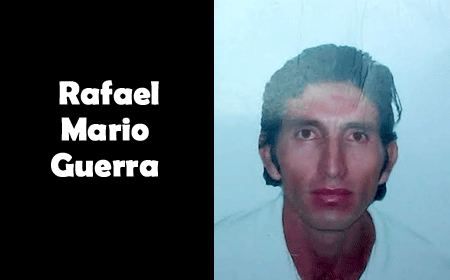 BELIZE CITY, Tues. Apr. 11, 2017–Rafael Mario Guerra, 39, a construction worker of Holy Emmanuel Street, Belize City, was gunned down at about 9:00 last night near his home.

According to police, a gunman exited a van, fired the deadly shots at Guerra, hitting him in his head and torso, and then got back into the van, which sped away from the area.

Guerra was taken in a police mobile to the Karl Heusner Memorial Hospital, where he was declared dead on arrival. His body was then taken to the morgue, pending a post-mortem.

Police reported that Rafael Guerra was walking when a van, which was passing by, stopped a short distance in front of him and two men exited. One of them, carrying a firearm, opened fire on Guerra, hitting him multiple times.

Area residents reported that at least 10 shots were fired at Guerra.

Guerra’s relatives told Amandala that he was at home when he got a call from a friend who wanted to borrow his bicycle pump to inflate his bicycle wheel. When Guerra found the pump, he went out to the Holy Emmanuel Street Bridge, about 75 yards from his house, to meet his friend.

Guerra was standing by the bridge, waiting for his pump to be returned, when the gunman opened fire on him. His friend reportedly saw the men and sprinted away, forgetting to warn Guerra of the danger.

Guerra’s family has since been trying to contact his friend to get an explanation from him, but they are unable to locate him and he has not been answering his phone.

The family is convinced that Guerra was not the intended target. He was not known to be part of a gang or to be a violent person, and had no known feuds with anyone. They strongly believe that it was the person to whom he loaned the pump, who might be a gang affiliate, and who may have been the intended target.

Area residents told us that Guerra generally was a loner, and he only went out last night because he was helping his friend.

The family told us that this day, April 11, the date of the murder, is the same date on which their grandfather was murdered 13 years ago in El Salvador.

The family is devastated and mourning the sudden death of Guerra. His sister spoke fondly of him, saying that he took good care of her and would religiously wake her up every morning to go to school.

Rafael Guerra is survived by his mother, 1 sister and 4 brothers.

Police have begun an investigation into the murder, but so far no one has been arrested or any suspects detained.