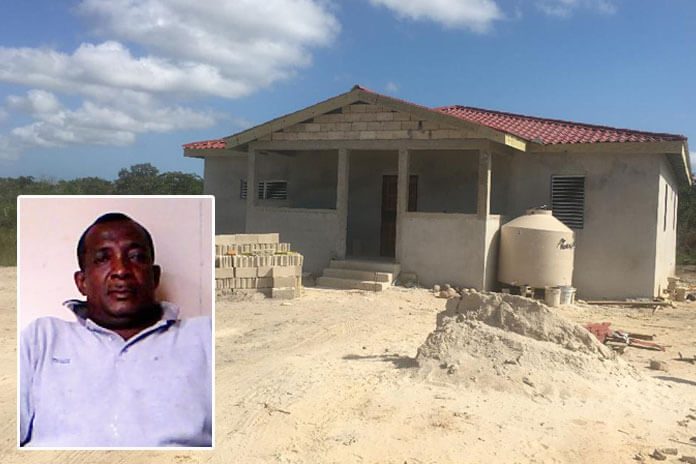 Neighbors heard the shooting, but heard or saw nothing else

LADYVILLE, Belize District, Thurs. Apr. 2, 2020– There was an early morning shooting in an isolated area of the Milpa area of Ladyville that left one man dead. When police went to the area, they found the body of a man who had recently moved into the area, according to neighbors who spoke on condition of anonymity.

One neighbor told us that the man, identified as Raymond Cheristal, 57, in a police report today, had only moved into the unfinished house about two to three weeks ago.

The neighbor said they were awakened this morning by what sounded like three gunshots. The shots seemed so close to them that he had to tell his children to lie on the floor, the neighbor said.

The neighbor said that Cheristal had told him that he had moved into the house from where he had been living because he had problems with his landlord.

Cheristal also told the neighbor that the money for the construction of the concrete bungalow house was being sent by his wife, who is living in the United States. His wife had plans to come to Belize to take up residence once the house was completed, the neighbor told us.

The neighbor told us that Cheristal was originally from Haiti, and that he had said that he had been living in Belize for about 30 years.

Another neighbor who also spoke on condition of anonymity told us that when they heard the gunshots, it was already daylight, about 6:00 a.m.

The gunshots were not the rapid-type gunfire; there was a pause between the shots, they said. By the time they looked, the second neighbor said, Cheristal was stretched out in front of his house.

Both neighbors whom we spoke with were unable to tell us what kind of work, if any, the victim did for a living. One of the neighbors said Cheristal might have been a taxi driver.

Apart from saying that they found the body, police did not say in what part of the body was Cheristal shot, nor did they make any other statement on the matter.

Feature photo: Raymond Cheristal and The location where the body was found