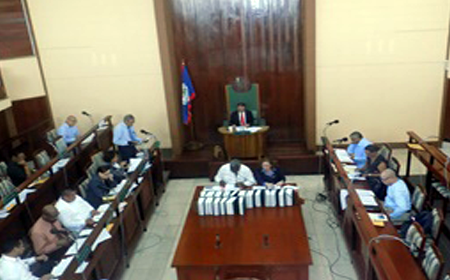 BELIZE CITY, Tues. May 21, 2019– On Wednesday, May 8, Belizeans went to the polls and voted “yes” to taking Guatemala’s territorial claim for a final resolution to the International Court of Justice (ICJ) and on Thursday, May 9, Prime Minister Dean Barrow announced that based on the legal advice of Belize’s team of international lawyers, government would amend the Maritime Areas Act, prior to Belize filing its defense against Guatemala’s claim at the ICJ.

On Monday, May 20, the House of Representatives passed the amendment to the Maritime Areas Act in record time. The bill sailed through the House in a spirit of renewed bipartisanship on the Guatemalan claim issue that has been absent since 2009, after the United Democratic Party government of Prime Minister Dean Barrow began handling the issue of the Guatemalan claim singlehandedly.

The spirit of bipartisanship continued at the Special Session of the Senate, where the amendment to the Maritime Areas Act made its way today. Opposition, People’s United Party (PUP) senator Eamon Courtney, who has had years of input in negotiations with Guatemala and will also serve on the government’s four-member bi-partisan committee on the ICJ, was impassioned in his address to the Senate.

Senator Courteny remarked, “The people of Belize have decided that this matter will be resolved by the decision of the International Court of Justice. We should not forget that more than five decades were spent attempting to resolve this issue by negotiations and I make no apology for saying that it has not been resolved, because of the fault of the Republic of Guatemala. The last serious effort was the facilitation exercise which Guatemala participated in fully. They were one with the proposals made by Ramphal and Reichler after fully participating in it and after fully saying that they will accept the recommendations given by the facilitators. We could have solved this issue by negotiations and by facilitations. We could have been living as good neighbors from way back in the early part of the 2000’s. It is the fault of Guatemala that we are now being forced, both the people of Belize and the people of Guatemala, to spend millions of dollars of scarce resources going to the ICJ.”

Senator Courtenay continued: “We as Belizeans expect Guatemala to behave with maturity and respect for Belize whilst we conduct the litigation. It will take anywhere from 3-5 years and during that time, we expect them to recognize and respect our right in the Sarstoon River, in the Bay of Honduras, in Chiquibul and indeed along the entire border between Belize and Guatemala.

“The message to Guatemala is clear: 8,867 square miles is Belizean territory and the territorial waters that go along with it and the exclusive economic zone, and make no mistake about it, when the International Court of Justice delivers its decision we expect and we are confident that the result will remain as it is today and therefore we call on Guatemala from now, since you have forced us to go to court, to accept the judgment against you that is just years away.

“We fully support this amendment to the bill and we call on the government and all partners to let’s move forward together, confront the enemy that is before us and let us assure ourselves of the victory that is rightfully ours.”

United Democratic Party (UDP) senator, Michael Peyfefitte, sounded a note of caution and stressed that Belize wants to live in peace with Guatemala and is not seeking confrontation: “Since the referendum ‘yes’ vote, the government has not sat down and said, ‘Well, the struggle is over.’ We continue to ensure that we do everything indeed to protect the territorial integrity of this country, and if there is one diversion from Senator Courtenay’s passionate tough talk about defending the territory, we also have to remind ourselves that we want to live in peace and we’re a peaceful nation.

“Sure, we would defend our territory to the bitter end, but at the same time, we are not going to engage in any behavior that would provoke any kind of animosity when we know that we have in, just a few years, the best possible chance to have Guatemala forced to behave itself.”